While reading this, you are unlikely to consider how this website was built, what special coding was needed to create a page that compelled you to look, or what intricate steps were needed to make the photographs pop. It’s easy to take for granted the ubiquitous internet.

While improved tools make it easier to produce engaging websites, they don’t appear by magic. When Jon Arnold began working in the Office of the President, developing the president’s website in the mid-1990s, he spent a lot of his time coding. There were no modern graphical user interfaces (GUIs) or WYSIWYGs (What You See Is What You Get) editing software. Coding HTML (Hypertext Markup Language) – a system to incorporate fonts, colors and hyperlinks on the World Wide Web – is essential.

“Each individual page still needs some individual care to achieve what a content owner wants,” said Arnold, who is the web administrator for the Office of the President.

With a background in production art and his enduring love of computers, Arnold has been an integral part of university communication projects and system website development for 25 years.

1. How did you come to be at the University of Colorado and in your current position? 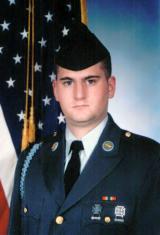 I moved to Colorado from Wichita, Kansas, in January of 1994. I had just completed a certificate program at a technical college for production art and computer design using the GI Bill. Not surprisingly, that didn’t get me very far in the job market in Boulder. I knew computers well and could type pretty fast, so I decided to do some temp work until I found what I was looking for. I was hired to type correspondence written by others and sat at a desk just outside the copy room for then-CU President Judith Albino. I really admired her courage. She was strong, but in a kind way. She had a great sense of humor and surrounded herself with a caring team of people that made a big impression on my young self. I started covering the front desk and eventually took over the job about six months later. 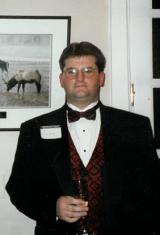 The World Wide Web was a relatively new medium in 1995 when John Buechner became president, but the work and design was very much in line with my previous training in production art. I was asked to be a part of a small team that developed and maintained the president’s first website.

The Office of the President and CU system was a much smaller organization with nothing much outside of the vice presidents’ offices. We all fit in a converted three-story house at 914 Broadway on the CU Boulder campus. Even then, there was discussion about moving the offices off the Boulder campus. In my brief time, we had experienced protests, hunger strikes and a number of campus-based issues coming through the door that would be better addressed with the campus chancellor. System did finally move to Denver in 2008.

In March of 1997, I jumped at an interesting opportunity to join the newly formed Administrative Streamlining Project (ASP). This large multi-year project was located off campus, and recruited CU personnel from all four campuses were charged with consolidating the human resources and finance processes and implementing an enormous information technology infrastructure. And, everyone had to be trained to use it, which was a big task, because, at the time, some staff members didn’t know how to use a computer. After a year of working on the administrative side of things, I became the project analyst, maintaining a detailed, multi-year project plan while also working on websites for our organization as well as creating new sites for the organizations the ASP had spawned: Payroll and Benefit Services (now Employee Services) and the Procurement Service Center. 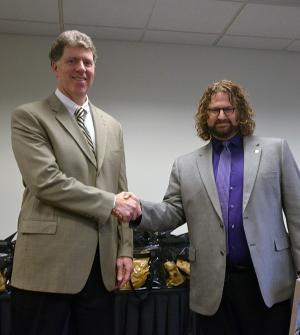 After the project was completed in 2000, I moved to Change Management offices of University Management System (now UIS) and returned to working on a newly designed CU system/Office of the President website as well as other service center sites I had been working on for a few years. In 2011, I was offered the opportunity to work for (Vice President for Communication) Ken McConnellogue in University Relations, thus bringing me full circle – back to the president’s office, working with some of the same people I did more than 25 years ago.

As web administrator, I work with content creators, managing all the technical aspects of the CU.edu web presence and Content Management Systems. This also involves acting as a liaison between the CU content owners and our various development and marketing partners. In addition to technical support, I also conduct all training for the system.

2. How did you choose this profession and was there a person or event that influenced you?

I was part of the first wave of kids to get into real computers in the ’80s. Both of my parents are public school teachers and I got my first Apple IIe when I was 12. I remember sweating it out in non-air-conditioned schools in the summer just to take the few and far between computer classes that were available at the time. They finally brought in big fans for the computers, not the students. That led to my love of computer-aided design in general. My background and training in production art/graphic design was a natural progression to the then-new medium of the web.

3. One of your duties is to produce CU Connections each week. What are some of the special challenges?

One of the most creative parts of the job is that I gather a mix of provided or researched photography and artwork or create original artwork for both web and email applications. I spend a lot of time doing corrections to get photos up to usable quality. If you have good content, design becomes an exercise of getting out of the way. The hard work comes when you need to drive people to your site and grow your audience. Understanding what strikes a nerve with your primary audience (tenure, personnel changes, benefit/salary changes) and what gets amplified through secondary networks (guns, weight loss and cannabis) is important. To enhance growth, your brand and online presence needs to be bigger than just one website and our social media presence is essential to modern mass communications.

The phone and tablet have changed many aspects of our lives in the last 10 years, but one of the first impacts was to change how we consume news. While we take the mobile-first approach when it comes to all our sites, CU Connections is a news-specific site and for which we took special care to develop the mobile experience. It has been out there a few years and it is still one of the best sites to consume on your phone.

4. What other duties do you have at the university? Given your computer skills, are you the go-to person when anyone has a problem? 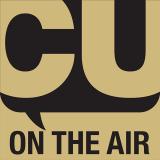 My favorite job duty outside of the web is my work on the CU on the Air Podcast. Along with Ken McConnellogue, the host, and Cathy Beuten, the producer, I visit the CU campuses to meet with some of the most intelligent, hard-working, creative faculty in the world and discuss their groundbreaking work. My background in music made me comfortable with the equipment and production software, and as a lifelong listener of NPR, I had a good sense of the art of audio story telling. 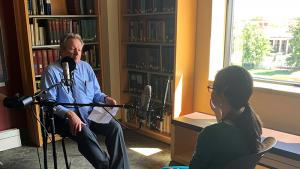 Early on in the process of developing the podcast, I thought we were going to use documentary-style audio, something like NPR’s “This American Life,” where there is music and pauses. We built a sample that took more than a week to put together because we had to research and collect the music. We presented this to Ken, and he could not have been less impressed. He said, “It was a good idea, but I guess we’re not doing podcasting.” So now we do it a little differently. Ken is now the host and personality of the show. We go onsite to record and then I do a quick clean-up of everything. We record about 45 minutes to an hour to get a half-hour of content. Once we have that rough cut, we get it transcribed. Cathy edits the text, building it into a story. Then I take that and remove all the pauses and “ums” and make the audio clear and listenable.

Our video production also has picked up considerably. President Mark Kennedy is a true pro when it comes to communicating through any medium; he absolutely glows on camera. It’s been a great experience tagging along and capturing his passion for education, innovation and his ability to connect with people.

I also develop graphics for posters and email campaigns for university branding and event support.

Beginning with my first job at CU, I’ve always been the helpful IT guy. When I visit my parents or in-laws, I spend half my time fixing every piece of technology in their houses. I’m also happy to be the go-to guy to run audio-video for many events.

5. Outside of work, what hobbies or leisure activities do you enjoy? 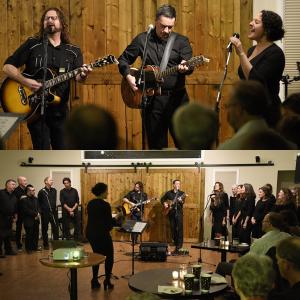 I have been a musician for most of my life. I am currently in a few different musical situations with my good friend and fellow CU employee and great guitarist Eric Gray, who works in the bursar’s office at CU Denver. I play drums and guitar and sing. After many years off the stage, Eric and I began to play and write together again as an acoustic duo. Our most recent interesting gig was working with the Golden Voices adult choir last November. We accompanied their songs, and they sang support for me on one of my original songs. A memorable musical experience. We’re just about to do our second show with them tonight! We’ve got some more musicians joining us and we’re debuting a new song. 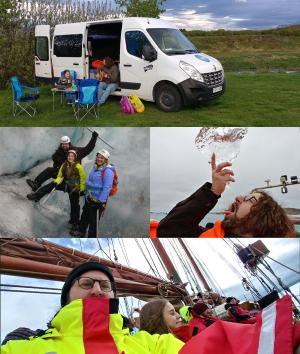 I should have started with my family since they are truly the most important thing to me. I’ve been married for 16 years. We have a 14-year-old daughter, Madi, who is a competitive gymnast in USA Gymnastics Trampoline and Tumbling. Our dog, Hazel, loves spending time on the CU Boulder South property near our house in Boulder. My wife, Chrystal Pochay, is the finance director of the Institute of Arctic and Alpine Research (INSTAAR) at CU Boulder. We love to travel, and more recent travel has been around the U.S. and surrounding my daughter’s meets. Some recent international trips we’ve taken include the Netherlands, Belgium, Barcelona and Costa Rica and in 2017, we drove a camper van around Iceland. It’s a small country, but it takes a week to drive around the rim road. It inspired future retirement plans of our own camper van and many road miles across the United States. 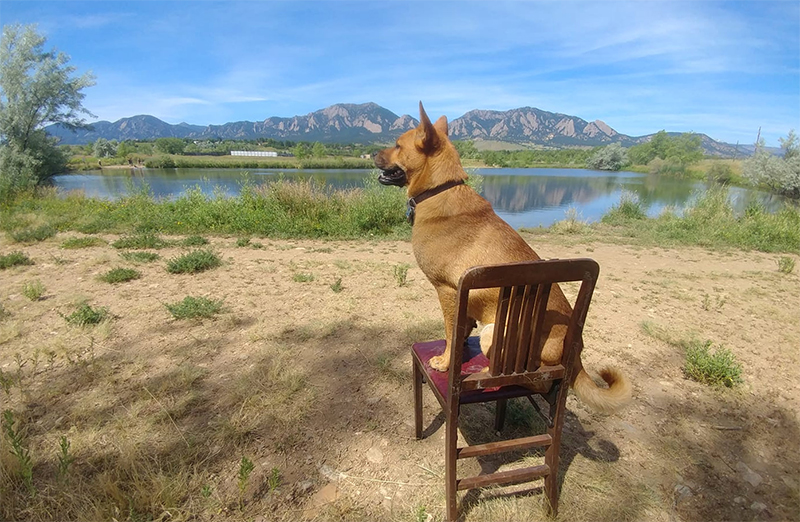 Hazel enjoying a rest at the CU Boulder South property

After a bad health checkup in 2017, I began a journey of healthier living. In about a year, I lost about 70 pounds and went through two generations of clothing sizes. Exercise has, by necessity, become one of my hobbies, and I love to talk about it with anybody who will listen, much to the chagrin of my colleagues and family.  I also became a vegetarian in 2019, and, with the exception of this past holiday season, have managed to keep the weight off. It was a lifestyle change. I take the bus to work every day and I walk during lunchtime. It can be tough at times because I live right down the street from the Sweet Cow in Boulder, and we are really close to lots of bars and restaurants. 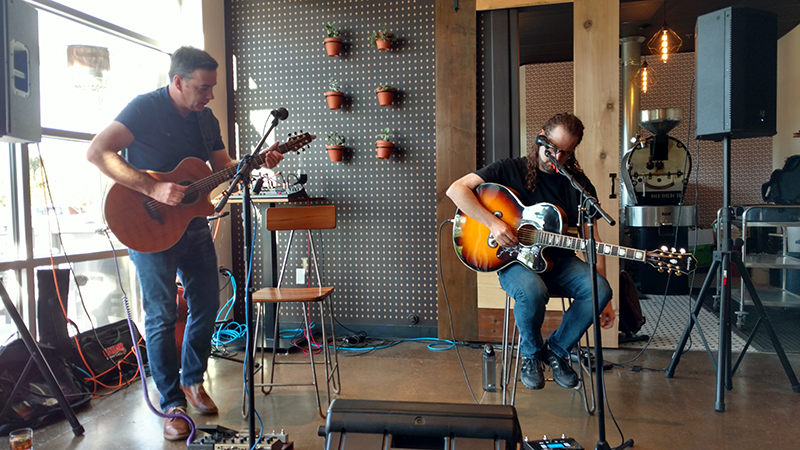 Publication note: No CU Connections on Thanksgiving, Dec. 22 and 29