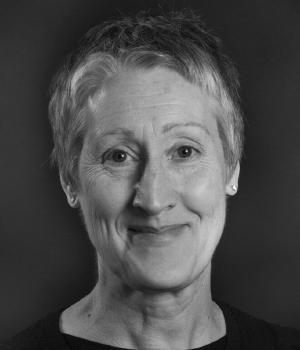 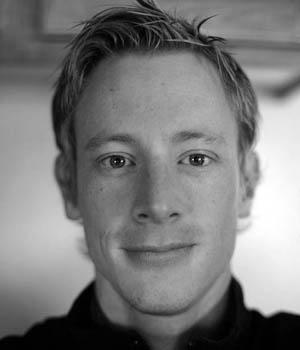 Lowry Pueblo, a settlement that likely was home to about 40 people in the early 11th century, has been called one of the most significant archaeological sites in southwestern Colorado. The pueblo included adobe structures that were as tall as three stories; eight kivas; and one Great Kiva that is about 50 feet in diameter and could accommodate about 100 people, and at one time was decorated with a painted, geometric mural.

Designated a national historic landmark in 1967, the site became part of the Canyons of the Ancients National Monument in 2000 and is overseen by the Bureau of Land Management (BLM).

In an effort to develop a stabilization plan for the fragile architecture, the BLM worked with the University of Colorado Denver’s Center of Preservation Research (CoPR) in the College of Architecture and Planning to document the structures.

The project, which used Light Detection and Ranging (LiDAR) scanning to develop 3-D scans of the architecture, was developed by a team that included Ekaterini Vlahos, CoPR director; Michael Nulty, documentation coordinator, who manages the center’s state-of-the-art digital technology; and Kimberley Verhoeven, a graduate student in the architecture and historic preservation programs.

Earlier this year, the project team – CoPR, the BLM and the State Historical Fund – were honored with a 2019 Stephen H. Hart Award by History Colorado. The award recognizes outstanding projects and individual achievements in archaeology and historic preservation. Visit https://www.historycolorado.org/2019-stephen-h-hart-awards-historic-preservation to learn more about the award. In addition, visit https://www.cyark.org/projects/lowry-pueblo-national-historic-landmark/in-depth for more about Lowry Pueblo.

Vlahos and Nulty have collaborated on many documentation and preservation projects, and they worked together to answer a few questions about their work.

1. Why was it important to document the Lowry Pueblo? 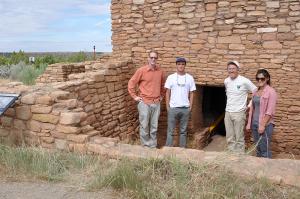 It was important to document this site to create a highly accurate and complete picture of the site at this moment in time. When we focus attention on these sites using new technology, it creates a renewed sense of interest and curiosity while furthering our understanding of the place. Because many of these sites are difficult to physically access, this type of documentation makes the site more accessible and presents the opportunity for people to experience it virtually.

These sites provide a glimpse into the past and may provide lessons on sustainable building practices and appropriate use of local materials. So we are learning from the past to inform the present and future.

2. You used LiDAR. How does it work? When did its use become prevalent and how has the technology evolved? 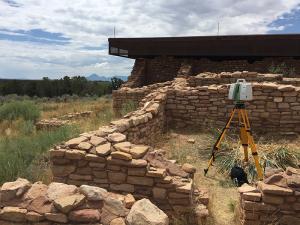 A LiDAR scanner in the field.

LiDAR is a laser-based technology that records millions of highly accurate points in space. All of these points come together to create a 3-D model called a point cloud.

The Lowry Pueblo and Great House took three days of onsite scanning. This was a highly complex site with over 40 rooms plus the Great Kiva. The organic nature of the site’s architecture made LiDAR a perfect tool for gathering the 3-D data. It would have taken weeks to collect the data using traditional tape-measure techniques. Depending on the size, scope and intended outcomes (interpretive purposes, resource management, visualization), the field time can vary greatly.

The LiDAR data is processed, registered and photo-textured with specialized software. Once this initial processing is complete, the data can be mined for a wide range of useful deliverables. The data can be used within geographic information system (GIS) applications, computer-aided design (CAD) and building information modeling (BIM). Over the last decade, this technology has become more widely used for historic preservation, but it is still a very small percentage.

This is a very exciting time in the field of archaeology and LiDAR has proven to be an incredibly powerful tool for discovering the unknown. For these projects, Aerial LiDAR has been put to work as they scan massive land areas from airplanes. Researchers are able to separate the images of the tree canopy from the ground plane and to look for patterns on the surface of the ground using the scan data. The technology does not have the ability to scan through objects and is a line-of-site technology.

We use Terrestrial LiDAR and scan from the ground whereby the scanners sit on tripods. Interestingly enough, though, the first LiDAR project we were involved with was at Wyoming’s Fort Laramie. After the scanning took place, we were able to see features in the landscape that were pronounced in the data but were not obvious to the naked eye. The LiDAR data gave us a new lens from which to view this site as building foundations and ground disturbances were revealed in the data. Although the formations were not obvious when looking at the site, once we reviewed the LiDAR data these features became very clear and we could verify the precise location of previous buildings and site activities.

4. For what other projects have you used LiDAR, and what other techniques do you use in your preservation work?

We use LiDAR extensively and have scanned dozens of sites throughout the West. We work directly with our federal partners at the National Park Service (NPS) and the BLM, as well as national and local architecture firms to support historic preservation efforts. We use a wide range of other technologies as well, including photogrammetry and reflectance transformation imaging (RTI) to better understand subjects depending on the specific outcomes of a given project.

LiDAR really provides a strong foundation of spatial information that can be drawn from to provide a wide range of research information. As an example, we often use LiDAR data to create Historic American Building Surveys (HABS). These are traditional architectural drawings that are submitted to the Library of Congress as part of its collection. The highly accurate and measurable scan data is used as a base for hand drawing.

We also complete building and cultural landscape surveys, and assessments of communities all over the state. Oftentimes our survey work takes on the form of pattern books for communities and preservation planning, providing a better understand of the inventory and character of the neighborhoods and communities. In our assessment work, we use tools such as Historic Structures Assessments (HSA) to understand at a deep level the physical state of a particular structure or building.

5. The center also documented model train layouts at Union Station. What other research projects are you currently working on?

We have had the opportunity to be part of the documentation effort of several Japanese American Confinement Sites (JACS) throughout the west. To date, we have scanned four of these sites in partnership with the NPS. They include Amache, Topaz, Heart Mountain and Manzanar. We will be back at the Amache JACS (in Granada, Colorado) later this year to complete phase two of the project, which involves scanning the entire square mile of the site. Previously, we scanned significant buildings and structures there.