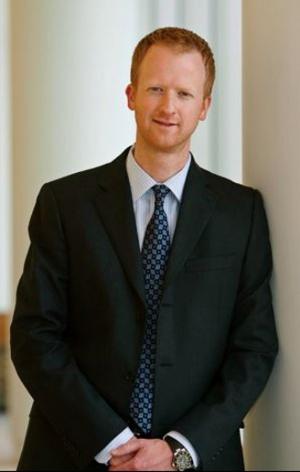 As a clinician-educator, Brandon Combs takes a thoughtful approach to the health care system, patient outcomes and the training of future physicians.

Doctors often feel it necessary to do something to help a patient, he said, but sometimes those well-intended tests or treatments don’t actually help – and can also do harm. That idea was something he often thought about during his residency at the University of Colorado. After joining the university as a faculty member, he co-founded the Do No Harm Project to highlight such instances, which are referred to as medical overuse.

In truth, he thought about how physicians could improve health care practices even before then.

“In college, I felt if I became a physician, I would be doing something that would be compellingly useful and that made me feel good,” he said. “As I think about this more as the years have gone by, the fact that my mother became ill when I was in high school was more influential than I probably gave it credit for. That experience strongly influenced why I went into medicine and became an internist.

“The things she dealt with and the things that I observed, especially instances where I felt communication could have been better. There was a lot of anxiety and fear and those could have been allayed, but they weren’t.”

Combs felt that as a physician, he could do better. After finishing medical school at Saint Louis University, he came to CU in 2007 for his residency. He joined the faculty in 2010. Combs is an associate professor of medicine, specializing in internal medicine. He’s affiliated with the University of Colorado and the Veterans Affairs Medical Center.

In 2012, Combs and a colleague – Tanner Caverly, who is now at the University of Michigan – co-founded the University of Colorado’s Do No Harm Project to highlight instances of medical overuse as an educational tool for physicians in training.

In addition, he’s a senior fellow for medical education with the Lown Institute and an editor for the Teachable Moments section at JAMA Internal Medicine. He also has served as a visiting professor for the past three years at the University of Zimbabwe.

1. What was the impetus of the Do No Harm Project and how has it evolved since you co-founded it in 2012?

There’s a common perception that exists among clinicians that the provision of common health care interventions -- like blood tests or scans or medications -- generally will lead to improvements in the health of patients. We see evidence of this all around us, for example, with health fairs, antibiotics for minor respiratory infections or the use of MRI for simple low back pain. Because we often feel positively about these interventions, physicians can have a hard time recognizing when more health care – even things that are the standard of care -- may actually be worse for the patient. This is not malpractice, rather care that seems quite reasonable but is probably avoidable, so-called medical overuse.

As a means to raise awareness concerning patients that were harmed or nearly so by health care that seemed perfectly reasonable, Tanner and I decided to start the Do No Harm Project. Basically, we asked trainees – medical students and residents – to write up clinical cases of medical overuse and review the scientific evidence as well as the patient’s unique perspective and then reflect on how we can do better going forward.

One of the things that was inspired by the Do No Harm Project is a journal section in JAMA Internal Medicine called Teachable Moments that launched in 2014. This section publishes clinical vignettes of medical overuse from trainees. Since 2014, we’ve published nearly 100 of these vignettes, and both Tanner and I are editors for this series.

2. Why is the program popular and a great educational tool?

I think it relates to storytelling. There is something about being human that we really connect with stories. The stories are also a scaffold for the science and a good way to help trainees learn the details of clinical medicine.

3. Are there statistics to showing how often a physician introduces a treatment that is unlikely to improve health?

There are some pretty jarring statistics that were reported by the Institute of Medicine a few years ago that say about one-third of every dollar we spend on health care is waste – about $750 billion annually. Waste is all of the things you might imagine: prices that don’t make sense; duplication of tests and studies because health records don’t communicate with each other; and missed opportunities. What I find really interesting is that a portion of that waste – about one-quarter – is considered medical overuse. As I mentioned, it’s not necessarily bad care, but seemingly reasonable care that nevertheless is unneeded on the basis of scientific evidence or patient preference. Yes, it is expensive, but the reason it matters is because it is harmful and avoidable.

4. How often does a patient influence those decisions? Perhaps that patient has read something or seen a television advertisement touting a treatment or medicine.

Of course, patients will influence treatment decisions, but more than that, they influence our conversation. I want to know their perspective and what they are worried about, where they heard something, what they’d like to do about it. And that way I learn where they are coming from.

I worry that patients are sometimes blamed for being demanding or that ordering behavior is driven by fear of malpractice, but that is not the whole story. First, these things are hard to see in real time. It can be a product of our own cognitive biases, the fear of being wrong or fear of hurting the patient if we don’t do something. Humans don’t like uncertainty; we don’t like operating in shades of gray, we want to know for sure.

5. What would you consider to be one of the most important lessons you have learned during your time at CU?

I don’t know if there’s one thing in particular, but there has been something about the gravity, the seriousness of the work as a resident and now faculty physician that is incredibly meaningful for me. I like to think that I am doing something useful and making a difference. The experience I’ve had here has been tremendously gratifying.