Glenn Asakawa/University of Colorado
CU leaders, including President Bruce and Marcy Benson, gathered with members of the CU Advocates at the Capitol on Tuesday.

Tuesday’s CU Advocacy Day at the Capitol was noteworthy for, among other things, appearances by Colorado’s new governor and lieutenant governor. It was made even more special by tributes from state lawmakers to President Bruce Benson, who also reflected on his nearly 11 years at the helm of the university.

The annual event drew about 160 members of the CU Advocates, the official grass-roots network of the university, and others, including members of the University Perspectives program. The advocacy event, which included a breakfast with legislators, took place at the Denver Consistory adjacent to the Capitol. Following the program, most made the chilly walk across the street to the Capitol to see Benson and his wife, Marcy, be honored by legislators in the Senate and House chambers. 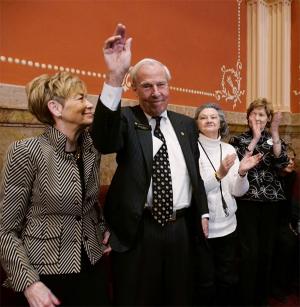 As Benson’s planned July retirement from CU draws closer, he took the opportunity at the Consistory to clarify something for the audience:

Still, he did take time for reflection during a Q&A led by Kimbirly Orr, 2016 CU Advocate of the Year.

As for achievements during his tenure, he said he’s most proud of cultural change, “one of the biggest things I think has got to happen in this country and at all universities.” He stressed his encouragement of an environment that values collaboration, teamwork and respect.

“You can disagree, but don’t be disagreeable,” Benson said. “Maybe Washington will start paying attention and doing the things I’m talking about.”

When asked what guidance he might give CU’s next president, Benson offered to-the-point advice: “Don’t come in and clean house on Day One,” he said, emphasizing the leadership of chancellors and others across the system. “Pay attention to the people we’ve got here because they’re very strong.”

Benson also encouraged members of the CU Advocates to “keep doing what you’re doing,” which recently included formally expressing thanks to Gov. Jared Polis for his suggested budget’s inclusion of a 13 percent funding boost for higher education. The budget still must be approved by the Legislature in the coming months. 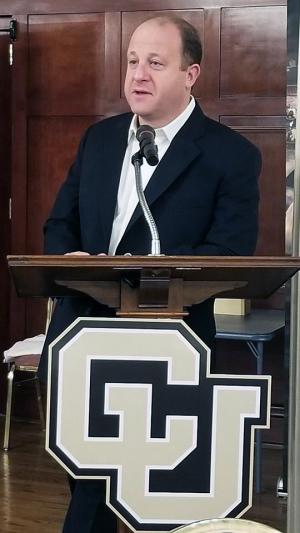 Polis, the former congressman whose 2nd District includes CU Boulder, made his first appearance at CU Advocacy Day, an event that in past years included visits from Sen. Cory Gardner and then-Gov. John Hickenlooper.

“I’m excited to be working with CU in a new way – I now get to work with you on the state level for the entire CU system,” Polis said.

The early weeks of Polis’ administration have included a push to cover the costs of all-day kindergarten for students across the state, an effort that was applauded by the audience.

Polis said his recommended budget increase for higher education – and its stipulation that tuition be kept flat this coming year – “is a step in the right direction. But we can’t just throw money at something and expect it to change.” He said he expects state leaders and higher education institutions to begin “a serious discussion about reducing the cost of a degree.”

“Our goal, of course, is to make higher education accessible to any Coloradan who’s willing to work hard to get there,” Polis said. 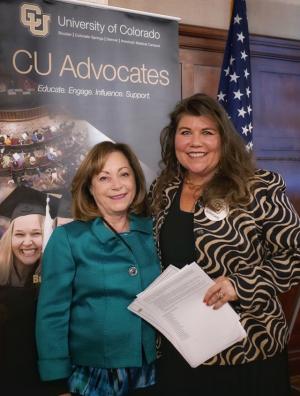 Lt. Gov. Dianne Primavera also made her first visit to CU Advocacy Day, where she told her story of survival following a breast cancer diagnosis 30 years ago. At the time, she was told she had five years to live. By taking part in a clinical trial at what was then the University of Colorado Health Sciences Center, she beat the disease.

“I owe my life to the doctors at CU,” she said. “That clinical trial saved my life.” One of her daughters now is a nurse at the University of Colorado Hospital. 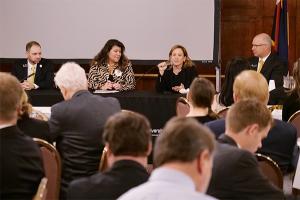 The event was presented by the CU Advocates program and the university’s Office of Government Relations.