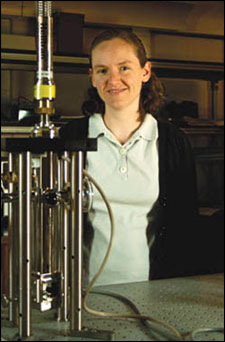 The Clare Boothe Luce Award is designed to "encourage women to enter, study, graduate and teach in science, mathematics and engineering." The $645,000 award is expected to fund Regal's academic teaching and research pursuits for the next five years. Regal joined the physics faculty at CU-Boulder in January 2010, teaching an electronics course for undergraduate physics majors. She also runs her own lab as part of the Joint Institute for Laboratory Astrophysics, a renowned research institute that partners with the National Institute of Standards and Technology and specializes in atomic, molecular and optical physics.

"I am grateful to the Henry Luce Foundation for their generous support of my work, which is for me both work and fun," Regal said. "The foundation actually helped me in an important time in my undergraduate studies, and I am excited they will support me again in this crucial stage of my career, in both my teaching and research."

Established in 1973, the award was created by Clare Boothe Luce – the widow of Henry R. Luce – a playwright, journalist, U.S. Ambassador to Italy and the first woman elected to Congress from Connecticut. According to the foundation's website, "Since its first grants in 1989, the Clare Boothe Luce Program has become the single most significant source of private support for women in science, mathematics and engineering."

Regal earned her Ph.D. in physics from CU. Her doctoral thesis earned top honors from the Hertz Foundation and the American Physical Society. Following her Ph.D. work, Regal was a Millikan Postdoctoral Fellow at the California Institute of Technology. During her undergraduate career, Regal had received a Clare Boothe Luce scholarship.