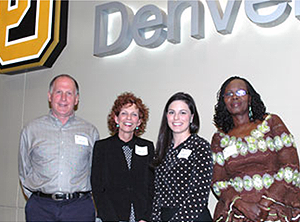 A high-achieving group of academics, all with a great devotion to the humanities and community service, received Thomas Jefferson Awards at a dinner and reception in the Terrace Room, Lawrence Street Center, at the University of Colorado Denver on April 2.

This year's honorees include two faculty members, a staff member and two students, and four of the five represent the University of Colorado Denver | Anschutz Medical Campus. The award was established at the University of Virginia in 1951 by the Robert Earll McConnell Foundation to honor teaching faculty who exemplified the humanistic ideals associated with Jefferson. By 1962, six other institutions—including CU—had established a Jefferson Award.

The award recognizes CU faculty, staff and students—staff and student categories were added in subsequent years—who demonstrate excellence in the performance of regular academic responsibilities while contributing outstanding service to the broader community.

"As somebody who is a humanities scholar and educator, I bring the humanities and arts into health professions' education and into the clinical environment of the Anschutz Medical Campus," Jones said. "In many ways it's creating a community—a kind of cultural community—out there at CU Anschutz. It means a great deal to me."

"What we do at CU-Boulder really matches what (Jefferson) talked about in terms of citizenship and informed and engaged citizens," Simons said. "That's something we place great value on."

Antonioli is in the fifth year of the eight-year M.D./Ph.D. program. She currently performs rheumatology research and would like to pursue research in autoimmune diseases as a career. She is donating her award prize to a pair of community groups. "Two of the groups I'm really passionate about are the Stout Street Clinic, which has helped me as a student, and the Aurora Fitzsimons Rotary Club, which just started a satellite club for students," Antonioli said.

Abyei said her home country of South Sudan, which in recent years achieved independence, is still struggling as a divided and war-torn country. "People go through daily hardship," she said. "We need somebody to tell them how to survive, how to stand up for yourself and how to never feel that you are less than another. I love education, and I never felt good that I didn't have my education." She wants to return someday to South Sudan as a teacher. "I need to work with the kids there to address some of the things happening." Abyei said.