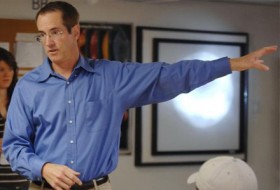 Douglas Duncan, a senior instructor in the Department of Astrophysical and Planetary Sciences at the University of Colorado Boulder and director of Fiske Planetarium, has received the prestigious Richard H. Emmons Award for excellence in college astronomy teaching from the Astronomical Society of the Pacific.

The award is conferred annually to someone demonstrating outstanding achievement in the teaching of college-level introductory astronomy for nonscience majors. Emmons was a pioneer of planetarium astronomy and the award is considered a top recognition in the field.

An advocate for pioneering methods of instruction, Duncan was one of the first CU faculty members to use “Learning Assistants,” a nationally recognized CU STEM (Science, Technology, Engineering and Mathematics) program that introduces younger undergraduates to teaching. The program has increased the number of K-12 science teachers in Colorado who have degrees in both science and education.

Duncan is the author of “Clickers in the Classroom,” a guide to the interactive technology that provides immediate feedback on how much students are learning in the classroom. He has served as national education coordinator for the American Astronomical Society, which represents the 7,000 professional astronomers in the United States. In that capacity he led efforts for better teaching and public communication for astronomers throughout the nation.

The Astronomical Society of the Pacific was founded in Northern California in 1889 and today is the world’s largest general astronomy society. The organization increases the understanding and appreciation of astronomy by engaging scientists, educators, enthusiasts and the public to advance science and science literacy.

Kiser honored by Women in STEM as outstanding professor

‘Power of One’ strikes gold in CASE District VI