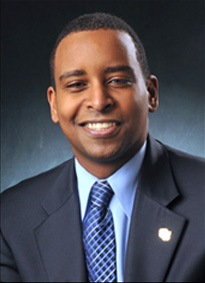 Neguse, a 2009 Law School graduate, will receive the Distinguished Recent Alumni Award. Neguse, who graduated from CU with a bachelor’s in economics and political science, is a civic leader who has spent years advocating for public higher education. He was elected to the Board of Regents in 2008 while still a student at Colorado Law. He is one of the youngest public officials in the state and was presented the “Rising Star Award” by the Colorado Democratic Party in 2010.  His six-year term ends in January 2015.

Other honorees are Jane Korn, who was named the first female dean of the Gonzaga University School of Law in Spokane, Wash., in July; Joe Blake, outgoing Colorado State University system chancellor who also led the Denver Metro Chamber of Commerce for 10 years; and William Johnson, a partner of Rothgerber Johnson & Lyons LLP who pioneered the “one bank holding company” concept and was the founding director of First Bank, who will receive the annual William Lee Knous Award.

Tickets to the University of Colorado Law Alumni Board Banquet are $150 or $100 (for those in the public sector). Proceeds from this year’s banquet will benefit the David H. Getches scholarship fund. Getches, who was dean of Colorado Law until June 30, 2011, established the scholarship just prior to his untimely death July 5, 2011.

Colorado Law also is launching its first Law Firm Challenge beginning Jan. 1, 2012, to raise additional funds for the Getches scholarship. A fun and competitive program, the challenge is designed to increase overall alumni giving, participation, strengthen the alumni network, and create stronger alliances with law firms in the local area. To find out more or learn about the Law Firm Challenge, contact Cheryl Franchi, Events Manager, at 303-492-8048 or Cheryl.Franchi@colorado.edu.