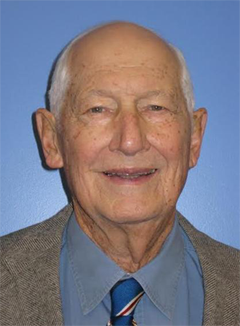 He was director of the Laboratory for Atmospheric and Space Physics (LASP) at the University of Colorado Boulder from 1965 to 1992 and professor until 2002 in CU-Boulder’s Department of Astrophysical and Planetary Sciences. He remained involved in research activities through 2013.

Barth earned his undergraduate degree at Lehigh University in 1951. He received his Ph.D. degree under Joseph Kaplan at UCLA in 1958.

Barth was a pioneer in developing space-borne ultraviolet spectrometers, small spacecraft platforms, and planetary exploration systems. Under his guidance, science instruments were sent to every planet in the solar system. He was involved in many NASA missions, including 59 sounding rocket flights; Mariners 5, 6, 7, and 9; OGO 2, 4, 5, and 6; AE C and D; Apollo 17; Pioneer Venus; Galileo; and Cassini. As Principal Investigator, Barth led the Solar Mesospheric Explorer (SME) and Student Nitric Oxide Explorer (SNOE) missions that were operated from LASP.

He was primary adviser for 22 Ph.D. students at CU-Boulder and inspired countless undergraduates in science and engineering with his commitment to hands-on education and training. Well-recognized for his research and teaching, his awards include the AGU Nicolet Lecture (1999), NASA Distinguished Public Service Medal (1983), University of Colorado Robert L. Stearns Award (1979), and NASA Exceptional Scientific Achievement (1972).