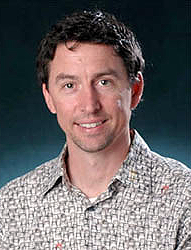 Two University of Colorado Boulder environmental researchers have been named Leopold Leadership Fellows for 2013 in recognition of their outstanding leadership abilities and desire to communicate scientific issues beyond academic audiences.

Krizek researches sustainable transport infrastructure, bicycle planning, transportation policies and land use. He also serves as outreach and education coordinator for sustainability and as senior transportation fellow for the CU Environmental Center. One of his recent papers examined the role of bike facilities in influencing people’s preferences for traveling around town. He found that people prefer bike facilities, such as designated lanes, more than the absence of street-side parking on roads, and that people will go up to 2 miles out of their way to get to a bike path.

Boykoff researches cultural politics of climate change and analyses of the transformations of carbon-based economies and societies. He also is a fellow of the Cooperative Institute for Research in Environmental Sciences (CIRES) and an adjunct faculty member in the geography department.

One of Boykoff’s areas of focus is the mass media -- a key vehicle by which climate change contrarianism has traveled, he says. Among his various and ongoing research projects, Boykoff has tracked climate change coverage in 50 newspapers in 20 countries on six continents since 2004.