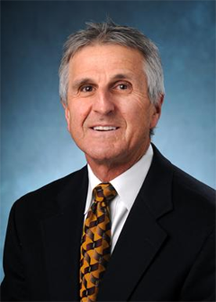 Bracken, who served as the 19th president of the University of Colorado in 2000, succeeds former CU President Hank Brown as the Newton Chair. Brown held the inaugural chair from 2008-10. The Newton Chair supports and helps to coordinate the activities of several marquee leadership programs at CU-Boulder, including the Presidents Leadership Class, the Leadership Residential Academic Program and the Leadership Certificate program.

The chair also helps to bring experienced leaders from government, business, higher education, the military and the public sector to campus to interact with students and faculty and advise students on leadership paths. Overall, the chair serves as a catalyst to expose more students campuswide to leadership training and development.

“I am delighted that former President Bracken has accepted the appointment to serve as our next Newton Endowed Chair in Leadership,” said CU-Boulder Chancellor Philip P. DiStefano. “He is both a scholar of leadership and an accomplished leader himself. His long record of public service has given him vital insights that will help guide our students and faculty in their studies of leadership.”

Bracken most recently served as executive director of the Bard Center for Entrepreneurship at the University of Colorado Denver’s School of Business from 2001-07. Prior to his service as interim CU president in 2000, he served as vice president for public affairs for 19 years with Ball Aerospace and Technologies Corp. and, before that, as assistant professor of history at Anderson College in Anderson, Ind.

Bracken also has been affiliated with several state commissions, including the Colorado Commission on Higher Education. He also served on the board of Boulder Community Hospital.

“It is an honor and a privilege to accept this appointment as the Newton Endowed Chair,” Bracken said. “Leadership is a key resource for Colorado and the nation, and I look forward to continuing the work of President Brown, Chancellor DiStefano and the faculty and staff of CU-Boulder in elevating the campus’s leadership programs to new levels of success.”

In March 2003, Quigg and Virginia Newton, CU-Boulder and the Boettcher Foundation established the endowed chair in leadership to pay tribute to Mr. Newton's extraordinary leadership throughout the region. Since then, the El Pomar Foundation and other individuals have joined in support of the chair. Quigg Newton served as mayor of Denver from 1947 to 1955 and as the university's eighth president from 1957 to 1963. Virginia Shafroth Newton, wife of Quigg Newton, is a third-generation Colorado native who has served in influential leadership roles including as a trustee of Vassar College and director of the Colorado Endowment for the Humanities.

The CU Foundation continues to seek donor funds to enhance the endowment; for more information, contact 303-492-5366.