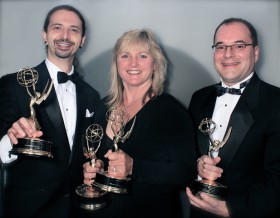 “Above the Ashes” director-producer Michelle Bauer Carpenter with associate producers Brandon Vaccaro, left, and David Bondelevitch and their Heartland Emmys.

Michelle Bauer Carpenter’s film detailing some of the heroic stories about the saving of homes during the catastrophic Fourmile Fire of 2010 recently won two Heartland Chapter Emmy Awards in the categories of best topical documentary and best program editing.

“Above the Ashes” was directed, produced and edited by Carpenter, an assistant professor in digital design in the College of Arts and Media at the University of Colorado Denver. The Emmys were presented in Denver and Oklahoma City on July 21.

Carpenter and her family live in the historic mining town of Sunshine in the Fourmile burn area.

“The losses our friends suffered are absolutely heartbreaking,” she said. “Over half of the homes in our neighborhood were lost to the fire. As soon as we were allowed home I began documenting the devastation.”

The film's surround sound, which received a nomination for best sound, was designed by David Bondelevitch, an assistant professor in CAM's music and entertainment Industry Studies Recording Arts program.

The film focuses on the untold heroes, the strength of mountain communities and the fire’s devastation. Carpenter’s video pieces have broadcast nationally and screened in numerous international and national film festivals and art galleries.

Another CAM-produced film, “Tuberculosis: The White Death,” co-produced by assistant professor Hans Rosenwinkel and associate professor Craig Volk, was nominated in the category of best history documentary. The film is being distributed internationally in an hourlong DVD. The film was a collaboration among Rosenwinkel, Volk, numerous other CAM faculty, many students, National Jewish Health and Elmer Koneman, professor emeritus from the School of Medicine. Koneman approached CAM about doing a film about the scourge of tuberculosis.

The film was shot in Berlin, Africa and Denver, including at national Jewish Health. A half-hour version of “Tuberculosis: The White Death” aired on PBS.