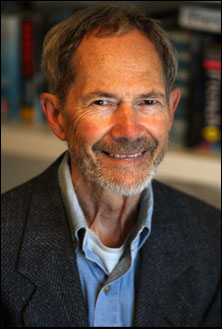 Fred Glover, Distinguished Professor at the University of Colorado at Boulder, recently was awarded the 2010 Impact Prize from the Institute of Operations Research and the Management Sciences (INFORMS).

The honor recognizes his seminal work on metaheuristic algorithms, specifically the development of Scatter Search and Tabu Search, and for his work popularizing these techniques as effective solution methods for previously intractable problems.

Glover helped pioneer the field of metaheuristics (which he named) with his introduction of Scatter Search in his 1977 Decision Sciences paper, "Heuristics for Integer Programming Using Surrogate Constraints." Over the next 10 years he continued his work, ultimately formalizing his revolutionary Tabu Search algorithm in his 1987 Computers and Operations Researchpaper, "Future Paths for Integer Programming and Links to Artificial Intelligence." These two papers garnered more than 2,000 citations, paving the way for the explosive development of metaheuristic research in the following decades.

Since that time, other researchers have used Glover's work to develop novel metaheuristic algorithms, sometimes by directly hybridizing elements of Scatter Search and Tabu Search.

Scatter Search and Tabu Search have remained two of the most prominent, most successful, and most widely applied metaheuristic algorithms. Their impact can be seen in almost any field that features extremely difficult problems of a combinatorial nature, including knapsack problems, telecommunications, network design, scheduling, financial planning, DNA sequencing, logistics, and computational biology. Despite the fact that these problems typically defy standard exact solution methods, Glover's work has shown that optimal solutions can often be found relatively quickly through application of intelligent search methods.

Glover also recently earned recognition in Interfaces, the Journal of Practice of Operations Research, published by the Institute for Operations Research and Management Science (INFORMS). An article in the November-December issue identified the paper most highly cited in scholarly work from 1989-2008 as Glover's "Tabu Search: A Tutorial" from 1990.