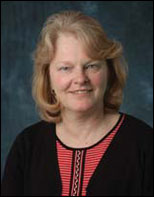 Jacquelyn Sullivan, Ph.D., associate dean for inclusive excellence at the University of Colorado at Boulder College of Engineering and Applied Science, is the winner of the 2010 Faculty Community Service Award.

The award, endowed by the Chase Corporation through the CU Foundation, recognizes a full-time faculty member who has rendered exceptional voluntary humanitarian, civic or other service in addition to her or his primary responsibilities at CU.

Sullivan is co-director of the College of Engineering and Applied Science's Integrated Teaching and Learning Program, and is well-known among her peers and other educators in the broader Denver metropolitan region.

She is a founding member of the Denver School of Science and Technology board of directors, and is credited with helping to raise more than $1 million for the school. She also led the founding of Boulder's Community Montessori School in 1995 and leads the national team that created the TeachEngineering digital library. In 2003, she was the founding chair of the K-12 engineering division of the American Society of Engineering Education.

At CU-Boulder, Sullivan established the BOLD Center (Broadening Opportunities through Leadership and Diversity), which is dedicated to supporting the success of women and other students traditionally under-represented in engineering.

Sullivan is a "tireless advocate for improving K-16 STEM (science, technology, engineering and mathematics) education through volunteer service with the National Academy of Engineering," according to Robert H. Davis, dean of the College of Engineering and Applied Science.

Sullivan's work "often reaches beyond the university walls to serve the greater community in Colorado," said Davis, one of three CU academics who nominated Sullivan for the award. "Dr. Sullivan's passion and commitment represent a powerful force for education at all levels in Colorado."

Anne K. Heinz, Ph.D., dean and associate vice chancellor for outreach and engagement in the division of continuing education and professional studies, wrote in her nomination letter that Sullivan's "passion and commitment for extending the university's knowledge resources for the betterment of K-12 students is extraordinary."