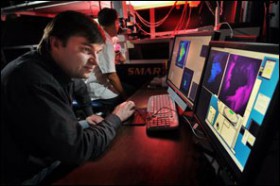 University of Colorado at Boulder faculty member Ivan Smalyukh is one of 100 men and women in the United States to be awarded a coveted 2010 Presidential Early Career Award for Scientists and Engineers, or PECASE.

The PECASE awards are the highest honor bestowed by the U.S. government on outstanding scientists and engineers in the early stages of their independent careers. President Barack Obama announced the awards Nov. 5. The award includes $600,000 of funding from the National Science Foundation over five years.

Smalyukh, an assistant professor in CU-Boulder's physics department and a member of the university's Liquid Crystals Materials Research Center, and his students are studying the organization of nanoparticle and molecular self-assembly related to precisely controlled structures in liquid crystals. The research is expected to help scientists develop new electrically and optically controlled materials that could lead to a number of technological breakthroughs, including more efficient conversion of solar energy into electricity using inexpensive solar cells and the development of flexible display and data storage devices.

"As a scientist and educator, I receive this great honor with deep gratitude," Smalyukh said. "The PECASE award is a strong encouragement for me and for my students. It will help us in achieving many important and ambitious research goals."

Established by President Bill Clinton in 1996, the awards are coordinated by the Office of Science and Technology Policy within the Executive Office of the President. Awardees are selected on two criteria – the pursuit of innovative research at the frontiers of science and technology and a commitment to community service as demonstrated through scientific leadership, public education or community outreach.

Smalyukh also was a winner of the 2009 National Science Foundation's Faculty Early Career Development, or CAREER award, the agency's most prestigious awards to junior faculty members around the nation. The NSF nominated Smalyukh for the 2010 PECASE awards.

He also is a founding fellow of the Renewable and Sustainable Energy Institute, a joint center of CU-Boulder and the U.S. Department of Energy's National Renewable Energy Laboratory.

This year's recipients will be honored at a White House ceremony with Obama in early 2011.