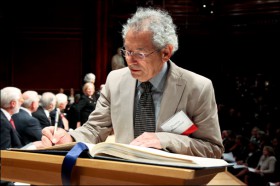 homas Blumenthal, professor and chairman of the department of molecular, cellular and developmental biology at the University of Colorado at Boulder, signs his name into the registry of the American Academy of Arts and Sciences during a ceremony earlier this month in Cambridge, Mass. Blumenthal is part of the academy's 2010 Class of Fellows.

Thomas Blumenthal of the University of Colorado at Boulder's molecular, cellular and developmental biology department was inducted into the American Academy of Arts and Sciences during an Oct. 9 ceremony in Cambridge, Mass.

Blumenthal joins a host of researchers, scholars and artists who are members of the academy's 230th class of Fellows. He is the 21st faculty member to be elected a fellow of the academy while at CU. Three others, including Norman Pace, distinguished professor of MCDB, were elected prior to joining the CU faculty.

"The induction ceremony celebrates the academy's mission and the accomplishments of its newly elected members," said Leslie Berlowitz, academy president. "Through three centuries of service, the academy and its Fellows have been dedicated to intellectual leadership and constructive action in America and the world."

Since its founding by John Adams, James Bowdoin, John Hancock and other "scholar-patriots," the academy has elected leading "thinkers and doers" from each generation, including George Washington and Benjamin Franklin in the 18th century, Daniel Webster and Ralph Waldo Emerson in the 19th, and Albert Einstein and Winston Churchill in the 20th.

The current membership includes more than 250 Nobel laureates and more than 60 Pulitzer Prize winners. Acomplete list of new members is available on the academy's website.