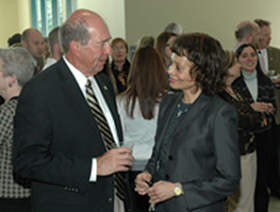 CU President Bruce Benson asked Jerry Wartgow to take on the job of chancellor for the University of Colorado Denver l Anschutz Medical Campus in 2010. At the time, both knew there was a lot of work ahead.

Wartgow wasn’t looking for work at the time.

“But this has been a chance to re-engage, and that's been fun,” he said. He admitted he likely “would not have come out of retirement if not for Bruce Benson.” Wartgow officially retired March 30.

Stepping into the chancellor role will be Don Elliman, who greeted well-wishers last week in the Terrace Room at the Lawrence Street Center.

Colleagues -- including deans, staff, faculty, even representatives from the CU Foundation and the Auraria Campus administration -- gathered to wish Wartgow well as he is set to begin his second retirement.

"We go back about 35 years," Benson said of his friend. Their professional paths have crossed over the years, particularly related to education and the Auraria Campus. Benson even joked, "Jerry, you've been a real failure at reitrement."

In thanking Wartgow for the work and contributions he's made here, Benson also acknowledged the efforts of Provost Rod Nairn in successfully achieving the first accreditation for the consolidated university.

Wartgow gave special 'shout outs' to a number of individuals, including the leadership team and assistant Diana Kelly.

Wartgow also shared that when he's been asked, 'What were you expecting when you took this job?,' his reaction is, "There's a remarkable resiliency the people have here to make this university work. And they did."

"This institution is on a trajectory to the top," Wartgow said. "It's been wonderful working with all of you."

Next steps and stops for Wartgow and his wife, Diane, include travel to Arizona and a roadtrip to Key West, Fla., with a return route through Wisconsin.