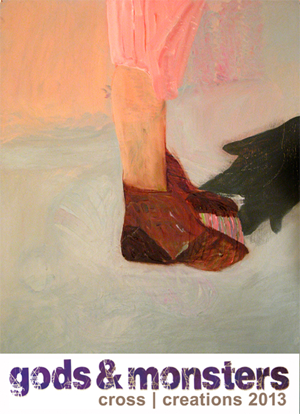 CROSS-CREATIONS: gods & monsters, the second bi-annual city-wide creative project organized by UCCS GOCA and five other Colorado Springs arts and culture institutions, features contemporary art exhibits, lectures, film screenings, panel discussions, performances, and a LUNCHBEAT dance party from September – November 2013. CROSS-CREATIONS: gods & monsters will inspire dialogue around the many ideas presented – on a city-wide scale. Sparked by discussions about Mary Shelley’s “Frankenstein” and the myriad creative possibilities under the theme of gods and monsters, science and ethics, good and evil, literary and film references, campy and deadly serious, the theme is ripe for creative interpretation.

Carol Dass, instructor, Department of Visual and Performing Arts, was born in Oakland, Calif., raised in rural Missouri and received her bachelor’s degree in art from Northwest Missouri State University. She has lived in Colorado Springs for 30 years and a UCCS photography instructor for 12 years. Dass’s work has been shown nationally and is in the collections of the Denver Art Museum, the Colorado Springs Fine Arts Center and numerous private collections.

Marina Eckler, lecturer, Department of Visual and Performing Arts, studied letterpress printmaking and art at San Francisco State University and earned a Master’s in Fine Arts from the Maine College of Art. Her work has been exhibited at the Harwood Museum in Taos, N.M., The Lab in San Francisco, the ICA Gallery in Portland, Maine, and the New York Art Book Fair. She currently teaches two-dimensional art.

Pauline Foss, senior instructor, Department of Visual and Performing Arts, received a Master’s in Fine Arts from the Vermont College of Fine Art, a master’s degree in art  from Adams State College and bachelor’s in art history the University of California, Davis. She has received numerous fellowships and awards, including a Colorado Excellence in the Arts Fellowship in 2002, and has exhibited her work nationally and regionally.

Olivia Lundberg, instructor, Department of Visual and Performing Arts, received  a Master’s of Fine Arts in painting from the Massachusetts College of Art & Design and a bachelor’s in studio art from the University of California, Davis. She has exhibited in New York, Boston, California and Colorado.

Claire Rau, senior instructor, Department of Visual and Performing Arts, was born in Sandusky, Ohio.  She completed her graduate work at the University of North Carolina, Chapel Hill, and presently teaches sculpture at UCCS. She is the recipient of several awards and residencies, continuing to build upon an extensive exhibition record in the U.S. and internationally. Rau is a founding member of The Front in New Orleans.

Erik Schubert , instructor, Department of Visual and Performing Arts, received a Master’s of Fine Arts from Massachusetts College of Art and Design, and a Bachelor’s of Fine Arts. from Columbia College, Chicago. Schubert has taught photography at MassArt, Greenfield Community College and currently teaches at UCCS. Schubert has been in several exhibitions throughout the U.S. including Boston Young Contemporaries, SPECTRA: National Photography Triennial, and was featured as the Photographic Resource Center’s NEO Emerging Artist, April 2009. In 2010, Schubert was included in the “On the Road: A Legacy of Walker Evans” exhibition at the Robert Lehman Art Center.

Sansara, a performance based Modern dance company in Colorado Springs, uses its dancer’s eclectic backgrounds and training to bring politically, socially, and personally relevant works to their audience. Literally translated, “Sansara” means continuous movement through life, a concept that the company’s dancers strive to convey in their work. Sansara seeks to push the envelope with thought-provoking subject matter while making dance accessible to all members of their community.