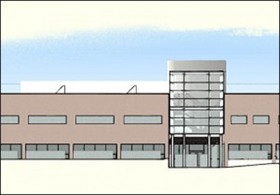 The soon-to-reopen Science Building at UCCS needs a new name, and campus leaders are hoping it will be temporary.

Brian Burnett, vice chancellor, Administration and Finance, explained why in his report to Faculty Assembly at its May 14 meeting.

"A new name needs to be recommended to the Board of Regents so they can approve it at their June meeting. That way we can have the signage in place for the building re-dedication," he said.

Renovations are nearly complete, he announced, with the opening of the building and re-dedication ceremony scheduled for 9 a.m. Aug. 19.

Burnett explained that having a Science Building and a Science and Engineering Building causes confusion. Throughout the 2009-10 academic year, during renovation work, four Science Building classrooms and the auditorium remained in use. Some students mistakenly thought their classes were in Science and Engineering. The inconvenience to students is one issue, he said, but emergency first responders could lose time if they don't know the difference between the buildings.

A new, less confusing name is necessary, but campus leaders also hope for a naming gift to provide some funding as well as clarity, he said.

But until that possible naming gift comes about, he said, the building needs a name with some character and heritage reflecting Colorado, similar to Columbine Hall named after the state flower.

Members of the campus community were asked which of the three names they prefer in an online survey that concluded Tuesday, May 25.

"We hope we can replace the temporary name as soon as possible," Burnett said.

The renovated building will house chemistry, anthropology, geography and environmental studies departments as well as classrooms, the Science Learning Center and the Gallery of Contemporary Art. Burnett said plans already are under way for a timely and efficient move-in before the semester begins.