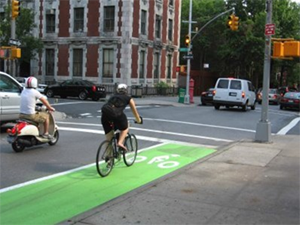 In a rare study of how street network design affects public health, researchers at the University of Colorado Denver and the University of Connecticut have discovered that older, more compact cities promote more walking and biking and are generally healthier than many newer communities.

The study, co-authored by Norman Garrick, Ph.D., associate professor of engineering at the University of Connecticut, was published recently in the Journal of Transport and Health. It looked at 24 medium-size California cities with populations between 30,000 and just over 100,000.

“We built these dense, connected street networks for thousands of years but only over the last century or so did we switch to designing sparse, tree-like networks with cars in mind,” Garrick said.

The researchers examined street network density, connectivity and configuration. Then they asked how these measures of street design impacted rates of obesity, diabetes, high blood pressure, heart disease and asthma. The study used data collected by the California Health Interview Survey for the years 2003, 2005, 2007 and 2009, sampling between 42,000 and 51,000 adults.

The results showed that increased intersection density was significantly linked to reduction in obesity at the neighborhood level and of obesity, diabetes, high blood pressure, and heart disease at the city level. The more intersections, the lower the disease rates.

The study also found a correlation between wider streets with more lanes and increased obesity and diabetes rates. The reason, the researchers said, was that wider streets may be indicative of an inferior pedestrian environment.  The presence of a ‘big box’ store also tends to be indicative of poor walkability in a neighborhood and was associated with a 13.7 percent rise in obesity rates and a 24.9 percent increase in diabetes rates.

The study also considered the `food environment’ of cities. Cities with more fast food restaurants were associated with higher diabetes rates while additional convenience-type stores across a city correlated with higher rates of obesity and diabetes.

Overall, the study showed that the healthiest cities had shorter blocks and more intersections. Marshall said that while Denver falls on the more compact side of the city spectrum, it also has far too many major streets with wide, multiple lanes that were associated with increased obesity and diabetes rates.

“Over the course of the 20th century, we did a great job of engineering utilitarian active transportation out of our daily lives,” said Marshall, who works in CU Denver’s College of Engineering and Applied Science. “While they were well-intentioned design decisions, they effectively forced people to make an effort to seek out exercise and we are now seeing the health implications of these designs.”

Marshall said it may still be uncommon to choose a place to live based on health outcomes but this research indicates that it might be worth considering.

“While it is possible to lead an active, healthy lifestyle in most any type of neighborhood,” he said. “Our findings suggest that people living in more compact cities do tend to have better health outcomes.”

Garrick pointed out that in their earlier study they had found that these more compact cities also had much lower levels of traffic fatalities.

“Taken together these findings suggest a need to radically rethink how we design and build the streets and street networks that form the backbone of our cities, towns and villages,” Garrick said. “This research is one more in a long line that demonstrates the myriad advantages of fostering walkable places.”

The study was co-authored by former CU Denver graduate student Daniel Piatkowski and is available upon request.