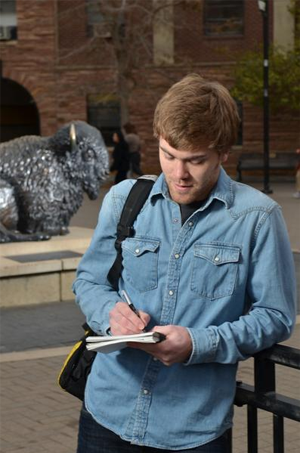 Jarad Christianson, a senior in environmental design, near the bronze buffalo statue outside Folsom Field. He included the landmark in some of the 74 campus routes he helped create for CU-Boulder's new way-finding maps. The project using universal design was part of Christianson's coursework. (Photo by Casey A. Cass/University of Colorado Boulder)

In a new set of way-finding maps, planters at the University of Colorado Boulder are more than decorative containers. The concrete vessels serve as directional prompts for people to navigate central campus.

The bronze buffalo statue near Folsom Field is another cue used in the online maps, as well as references like “exhaust fan at 10 o’clock” to guide those who use their sense of sound to move about.

Developed in part by Jarad Christianson, a senior in environmental design, the maps are “universally designed” and provide step-by-step routes in text and audio formats based on beginning and end points set by the user. Universal design is the design of spaces and tools such as the Internet to be used by people with all types of cognitive and physical abilities.

“We need to include all types of abilities across the board because everybody should have a fair shot at experiencing what’s on campus,” said Christianson, who navigated campus on crutches a couple of years ago while recovering from an injury.

The way-finding maps include directions for newcomers and visitors, cane travelers and guide dog users, and people with wheels such as wheelchairs, strollers and rolling luggage.

Christianson’s part in creating the maps included scouting campus and creating 74 routes between classroom buildings and other locations. The project, led by CU-Boulder’s Disability Services, was part of a research assistantship in environmental design for Christianson. Students in a technical writing class, as well as a student advisory committee, map testers and staff from several administrative offices also were involved.

Christianson, who says he’d like to go into architectural practice after graduation, says the project has changed his perspective.

“Being involved in viewing the built world and the natural environment from different perspectives has been really valuable in the way I think about design -- visually, acoustically and with regard to textures,” he said.

Over the next two years, more projects like Christianson’s will be integrated into various CU-Boulder academic fields and coursework. Robert Boswell, vice chancellor for diversity, equity and community engagement and a professor of molecular, cellular and developmental biology, is leading an interdisciplinary team that recently received a $40,000, two-year grant from the National Endowment for the Arts for universal design curriculum integration.

“This grant supports our commitment to enhance universal design across a variety of disciplines,” Banasiak said. “The enhancements can be made at many levels fostering inclusion as an aspect of multiculturalism and diversity on campus.”

Not only will strengthening universal design make the CU-Boulder campus more inclusive, it will impact communities and help graduates in their careers, according to the grant recipients.

“As part of the campus’s Flagship 2030 initiatives, our students and faculty are engaging more in the communities around them,” Jelacic said. “As we branch out from the university, going into public schools and working with senior citizens and other populations, having universal design knowledge will help our students be more effective as they go out and find jobs.”

Send your thoughts and suggestions for the Newsletter.
END_OF_DOCUMENT_TOKEN_TO_BE_REPLACED