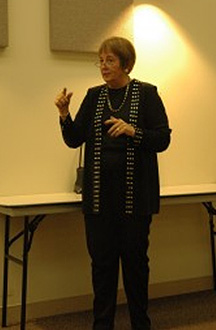 Strategic planning at UCCS will continue moving forward toward an April deadline, Chancellor Pam Shockley-Zalabak said at a recent forum.

But while forming the university’s plans through 2020 is a high priority for UCCS, Shockley-Zalabak took a moment to encourage faculty and staff to make time to cheer for UCCS basketball teams, which begin formal competition next week. The women’s basketball program is riding high after a Nov. 3 exhibition win over Division 1 U.S. Air Force Academy.

“I expect to see all of you at the games next week,” Shockley-Zalabak said amid chuckles from a crowd expecting to hear about more traditional chancellor-led topics.

The CU Board of Regents on Wednesday formally voted to charge UCCS to begin planning for the future, a process that’s been under way at UCCS since fall and highlighted by an Oct. 20 discussion session that drew more than 400 people and elicited more than 4,000 suggestions.

Those suggestions will be reviewed by 14 subgroups as well as an overall steering committee and combined with comments from those who are off-campus including members of a UCCS Ambassadors group, alumni and members of the CU Board of Regents themselves.

By Jan. 15, Shockley-Zalabak believes the formal input process will be complete, though she encouraged those with ideas to continue to share them with leaders and co-leaders of strategic planning groups. Next on the strategic planning agenda will be a review of the university’s decade-old vision and values statements. The results of a September survey will help guide those revisions, Shockley-Zalabak said, including the addition of elements such as globalization.

“We like our mission,” Shockley-Zalabak said. “It’s part of state statute. But we are going to take a hard look at our vision and values. The next thing you’re going to see from the steering committee will be drafts of a vision and values statement and you will be asked again to have input.”

Shockley-Zalabak encouraged input to be creative and forward-thinking while recognizing fiscal realities.

“In this kind of turbulent financial time, we should give the regents what we honestly believe we can do – not pie-in-the-sky things that we don’t know whether we can do or not,” Shockley-Zalabak said.

Shockley-Zalabak said drafts of a new campus plan will be broadly circulated in early 2012, with opportunity for input before submission to the regents and an anticipated April vote.

Brian Burnett, vice chancellor, Administration and Finance, addressed the 2013 UCCS budget and summarized Gov. John Hickenlooper’s budget proposal to the Colorado General Assembly. The governor’s budget calls for cuts to K-12 and higher education budgets. For UCCS, cuts in state support could amount to $3 million, though Burnett emphasized considerable changes are likely before a budget is adopted by the General Assembly.

“We are well-prepared,” Burnett said. “A five percent enrollment increase this year helped a great deal.”

Tagged with:
Board of Regents, Pam Shockley-Zalabak