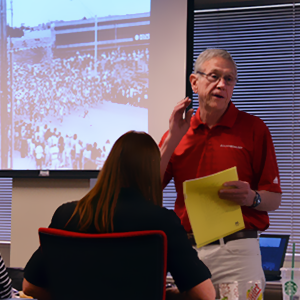 That was in 1979. Today, the Boulder entrepreneur and member of the University of Colorado Board of Regents is an undisputed expert on the topic, one who can point with pride to the Bolder Boulder whenever anyone might ask, “What’s a road race?” Or, more to the point, “What’s the best road race?”

Bosley traded his regental suit and tie for a Bolder Boulder logo polo shirt to offer a narrative history of the event during a brown bag lunch presented Tuesday by the CU System Staff Council at 1800 Grant St., Denver.

The 10K road race is entrenched as a Memorial Day weekend tradition in the state, expected to draw about 51,000 runners this year. Another 70,000 will make their way to Folsom Field on the CU-Boulder campus, where racers cross the finish line to the cheers of thousands, then enjoy an expo in and around the stadium.

“It’s been a fabulous relationship,” Bosley said of the Bolder Boulder-CU connection. “Over 120,000 people come through the stadium on race day, and 65 percent of them have no other experience with CU. So the opportunity for the exposure to CU and (to) tell the CU story … is one that’s pretty special.”

Bosley said the race creates a $10 million economic impact on the city of Boulder. The number of participants makes it one of the top two or three races in the country, and top six or seven in the world. Quality, though, rather than size, is the race’s goal.

“Size doesn’t matter in this case. What we want to do is be the best,” he said. Runners World Magazine named the Bolder Boulder the “All-Time Best 10K Race in America.”

The race has earned national accolades as just that, thanks in part to the big-money prizes for elite runners, the challenging and scenic route throughout the town, its spirit of celebration and the military tributes that honor the holiday. The race also is recognized for pioneering wave starts, a practice begun in 1984 that enables all skill levels of runners, joggers and walkers to take part without slowing – or being slowed by – one another.

“If you just fired the gun and everybody took off, most people wouldn’t be able to ever get up to speed and race,” Bosley said. “Here, you can run your whole race.”

The timing of those waves is a science, Bosley said, with race organizers employing a computer model to track five-year trends that estimate the optimal amount of time to wait between the start of each wave – 104 waves at this year’s race.

New on the Bolder Boulder website this year, Bosley said, is a way for past race participants to upload stories – words, pictures and/or video – that tell their personal connection to the race.

“So those stories that we hear all the time are humbling because of the effect (the race) has on so many people.”

Bosley’s oldest daughter created a special Bolder Boulder story after her Navy reserve unit was deployed; she devised the idea of a Memorial Day race for deployed troops who can’t be in Boulder. The race sends the troops T-shirts for the occasion.

“Over 15,000 troops around the world deployed in harm’s way have now run a Bolder Boulder,” Bosley said. “This year, there’ll be 2,800 running in five races around the world. One of them is on a ship, where they’ll be running laps on an aircraft carrier.”

Bosley also mentioned a letter sent earlier this month from CU President Bruce Benson to service members who are participating in satellite races around the world. It invites them to come run the Bolder Boulder free of charge after returning home, and asks them to keep CU’s campuses in mind should college education be part of their future.

“We don’t know what it’s going to produce, but I think that’s pretty neat,” Bosley said.

“We have had an outstanding series of meetings with Boulder police, CU police and other advisers. It’s the way government’s supposed to work.

“A plan has been rolled out. … We’re not going to tell what the game plan is, but we’ve got hundreds and hundreds of hours of planning into it.”

Security will be stepped up at Folsom Field, Bosley said, and off-duty law enforcement officers across the state have been invited to run the race for free, to increase the number of trained professionals at the event.