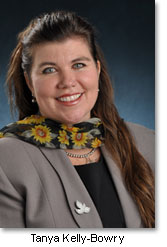 CU's federal relations team follows a broad array of bills each year as they make their way through the U.S. Congress, including legislation that might be of interest to CU in areas such as health care reform, renewable energy, NASA, the aerospace industry, patent reform, cyber security and other issues. 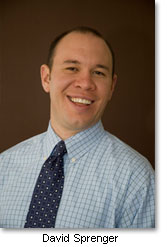 Sprenger advocates on behalf of CU-Boulder and UCCS, and the Denver-based Lyons promotes the interests of UC Denver's Anschutz and downtown campuses. They are supported by policy analysts Elizabeth Watkins and Connie Johnson in the Colorado office.

David Sprenger"The stimulus bill is truly a once-in-a-lifetime opportunity when it comes to increased federal support. The impetus behind it is job creation, and I can't think of a better example of job creation than a university," Sprenger said.

CU researchers submitted hundreds of grant applications in hopes of obtaining a share of the stimulus funding pie. Their grant proposals run the gamut from cancer research at UC Denver to particle physics at CU-Boulder, and from engineering scholarships at UCCS to a UC Denver program to improve math and science scores at Colorado middle schools.

Recently, CU engaged the services of the well-regarded Denver law firm Brownstein, Hyatt, Farber, Schreck (led by CU alumni Norm Brownstein and Steve Farber) to assist its efforts. The law firm will help CU set its funding priorities and develop strategies for tapping into even greater federal funding sources, according to the federal relations office. Lyons has received positive feedback from the chancellors, faculty and staff.

At CU, understanding the unique funding requirements for each of the university's campuses has become a top priority for both state and federal government relations staff.

"When you look at a university, it goes beyond student education and research. It goes to public-private partnerships and driving the economy. Universities play a unique role in that," Sprenger said.

To understand what each campus needs, federal relations liaisons meet regularly with chancellors, faculty researchers and other campus leaders to identify new funding opportunities. Lyons and Sprenger welcome contact from faculty members willing to share personal stories and research goals, which can help capture the attention of federal lawmakers.

"We don't want to interfere with what CU does best, which is bringing down federal research dollars," Sprenger said. "Our faculty are some of the best in the country when it comes to federal grants. We would not be in the position we are today if it wasn't for our faculty."

Recently, the federal relations office organized a series of campus visits for congressional staff and policy analysts to help drive home the message of how higher education contributes to Colorado's economic well-being and to introduce them to the work of some of the university's researchers. The office will invite the state's congressional delegation to tour CU campuses during the August recess. 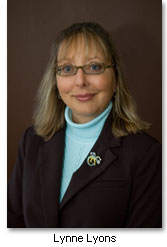 Lynne Lyons"One of the best parts of our job is getting together congressional members and their staff to meet with our exceptional faculty, and to be able to exhibit the great teaching and research done by our faculty," Lyons said.

The office worked with the state's congressional delegation to obtain support for the university's 2010 fiscal year appropriation requests. Among the highlights: