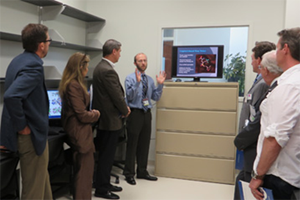 On June 6, Colorado Sen. Michael Bennet and Aurora Mayor Steve Hogan were joined by more than 45 state leaders getting a firsthand look at Colorado’s bioscience industry and the vital research being carried out at the CU Anschutz Medical Campus.

Organized by Bennet and hosted by the university, the Fitzsimons Redevelopment Authority, Terumo BCT and the Colorado BioScience Association, the event brought together attendees from academia, local governments and businesses, economic development groups and the bioscience industry.

During initial introductions in the Fulginiti Pavilion for Bioethics and Humanities, Lilly Marks, CU’s vice president for health affairs and executive vice chancellor of the Anschutz  Medical Campus, spoke of the groundbreaking discoveries that have emerged from the laboratories of the Anschutz Medical Campus.

Describing the campus as “a major economic engine for Colorado,” Marks described the impact the campus has “not only improving our lives, but improving the health of our state’s economy.” The importance of the campus to the state was highlighted by Marks’ revelation that the one square mile of the Anschutz Medical Campus generates more money for Colorado’s economy than the state’s ski industry.

Marks stressed the importance of bioscience to the university, stating that “biotechnology is an emerging priority for the University of Colorado Anschutz Medical Campus. We are a leading provider of health professional education, clinical care and basic and clinical research. So becoming a leader in biotechnology innovation and transfer fits right in with our mission. Sen. Bennet has provided tremendous interest in, and support of, biomedical research and technology, and his stalwart backing of the work on our campus helps us reach our goals.”

“An unbelievable champion of bioscience”

During his welcome speech, Bennet highlighted bioscience as one of the fastest-growing areas in the United States for job creation and spoke of Colorado’s “thriving bioscience community,” which is critical to Colorado’s economy. The sector employs 27,000 Coloradans, resulting in over 122,000 direct and indirect jobs and translating into over $10 billion in payroll. In 2011, there were 400 bioscience firms in the state paying an average annual salary of $76,000; now there are more than 600 companies paying an average salary of $84,000.

Bennet, described by Marks as “an unbelievable champion of bioscience,” has been an advocate for the bioscience industry throughout his time in the Senate. While addressing the assembled audience, Bennet spoke of the Advancing Breakthrough Therapies for Patients Act that he successfully wrote and passed in 2012.

“In the last two years, nearly 50 drugs have received “breakthrough therapy” designation to expedite the approval of promising drugs in the USA,” Bennet said, “and a number of them have been approved by the FDA, including drugs for leukemia, cystic fibrosis and lung cancer. The work on breakthrough therapies began right here on this campus.”

“The computer is not always right”

Throughout the day attendees were able to tour research laboratories at Anschutz Medical Campus, Children’s Hospital Colorado and Terumo BCT, a multi-national firm in Lakewood specializing in the collection, storage and transfusion of blood.

In the computational chemistry research lab, Donald Backos, Ph.D., highlighted the research into targeted therapies—drugs that treat disease without having an effect on healthy cells. To do this, researchers investigate which proteins are involved in helping the diseased cells grow and survive, but are not involved with the function of the healthy cells. “If we can design drugs that block the function of the proteins that aid the growth of the diseased cells, it will help to treat the disease,” explained Backos, “but without toxic events to the health surrounding tissue.”

“So, if everything just comes down to math, we can have a computer do it. And that's what computational chemistry and biology seeks to do.  We use the computer to solve the equations that describe the physics that govern the behavior of the chemical and biological systems."

Despite the importance of computers in the process of drug development, Backos was quick to stress the important role that humans play. “The computer is not always right,” he explained. “It takes a trained computational chemist to analyze the computer data correctly and come up with a right answer.”

The event was rounded off with a networking reception, ensuring that Colorado’s bioscience industry continues to flourish and benefit the state’s economy.

Tagged with:
bioscience, Skaggs School of Pharmacy and Pharmaceutical Sciences

Virtual reality opens patients’ eyes to their own cancerous tumors