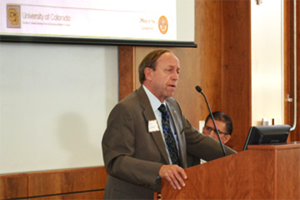 The growing threat of prescription drug addiction and the best ways to confront the epidemic was the focus of a daylong meeting Oct. 3 of the Colorado Consortium for Prescription Drug Abuse Prevention.

Wolk was speaking to about 100 health care providers and state officials gathered inside the University of Colorado Skaggs School of Pharmacy and Pharmaceutical Sciences.

Joining him was Colorado Attorney General John Suthers, who said over the last eight years the state had recovered 64 tons of prescription drugs in various take-backs.

“The amount of prescription drugs out there is mind-boggling,” he said.

At the same time, Suthers said, Colorado is seeing record numbers of heroin deaths as those dependent on opioid pain relievers often turn to heroin for relief.

Still, it wasn’t all bad news.

In 2009-2010, Colorado ranked second in the nation in the abuse of prescription pain medication among those 12 and older. That ranking dropped to 16 in 2011-2012. And the incidence of abuse by teenagers also dropped below the national average in 2013. The consortium is working together with the Legislature and the governor’s office to continue making strides to lower these numbers.

In the year since the consortium was founded, it has accomplished a great deal. One of the main achievements discussed was the Prescription Drug Monitoring Program, or PDMP.

The PDMP is a secure, statewide database of controlled substances that has been dispensed to an individual by registered Colorado medical professionals. The database, which has many benefits, can alert providers to potential drug abuse, facilitate and encourage the identification, intervention and treatment of those addicted to prescription drugs, and inform public health initiatives by outlining use and abuse trends.

However, one major drawback of the PDMP, according to state Sen. Irene Aguilar, M.D., who participated in one panel discussion, was getting doctors to take the extra step of entering the information into the database.

The event also focused on individual work groups, their accomplishments and plans for the coming year. The groups, which consist of professionals volunteering their own time, are working to not only help the public gain a better understanding of this epidemic, but also gather and decipher data on the subject. They hope to educate providers and prescribers, work toward better treatment plans for opioid abusers as well as safer disposal options for the drugs once they are no longer needed.

The consortium wants to convey the message of Safe Use, Safe Storage, Safe Disposal. And safe disposal does not mean flushing down the toilet. For years, doctors and pharmacist told patients that flushing was an acceptable way to dispose of the unused prescriptions. Yet new research has shown that this could pose a threat to our drinking water and aquatic life.

The nagging question of who will pay for disposal continues. A range of ideas was discussed, including user fees on disposal similar to those imposed for getting rid of motor oil and paint or having pharmaceutical companies picking up the fee.

The conference ended with a panel of three elected state officials – Aguilar, Sen. John Kefalas and Rep. Beth McCann – who have been champions for this campaign, followed by a breakout session of the work groups. All three officials had a collective “thank you” for the consortium in its continued efforts and progress being made in the area of prescription abuse and misuse.

Tagged with:
Skaggs School of Pharmacy and Pharmaceutical Sciences

Virtual reality opens patients’ eyes to their own cancerous tumors