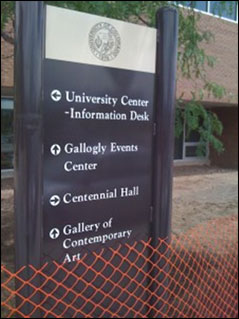 A dedication ceremony for the reopening of the renovated Science Building at the University of Colorado at Colorado Springs and its renaming as Centennial Hall is scheduled for 9 a.m. Aug. 19. Speakers, guests and tours will highlight the festivity, which celebrates the conclusion of the $17.1 million project.

Chancellor Pam Shockley-Zalabak will welcome CU President Bruce D. Benson and Colorado State Treasurer Cary Kennedy as special guests in honor of the occasion. Members of the CU Board of Regents also will be on hand for the ribbon-cutting ceremony.

The CU Board of Regents approved the name change at its June meeting. With the Science and Engineering Building less than a year old, UCCS administrators decided the name similarity with a reopened Science Building was too confusing. They recommended Centennial Hall as a Colorado-themed name that wouldn't necessarily be missed if a permanent name honoring a family or individual were adopted in the future.

Gary Reynolds, executive director of Facilities Services, remarked earlier this summer that the building was being literally transformed.

"From the new welcoming entrances and landscape, to the interior hallways, to modern teaching and research labs, to the completely renovated auditorium, past visitors to the building will not recognize it come this fall," he said.

The number of work stations in the labs varies, Reynolds said. For example, the Introduction to Chemistry lab has stations for 24 students, while the two Organic Chemistry labs have 10 fume hoods in each to accommodate 20 students. All labs are designed specifically for the three disciplines permanently housed in the building: chemistry/biochemistry, anthropology and geography.

The new auditorium features 290 new, leatherette seats with maple wood accents, in what Reynolds described as a "crown jewel" of a theater. New acoustic treatment of the interior, high-definition video with surround sound and a small amount of theatrical lighting will enhance lectures, academic presentations and many other functions. A new podium, curtains and screen also are among the improvements.

The Science Learning Center, one of the Project EXCEL learning facilities, is upgraded and 75 percent larger. The center features a reception desk, offices and meeting space in addition to a larger main room and adjoining 32-station computer room. Jerry Phillips, director, said students made about 44,000 visits to the center during the academic year and the larger, more inviting, space will serve them much better.

While the exterior walls look much the same as they have for 30 years, the interior boasts state-of-the-art facilities. Reynolds called the combination of smart classroom technology in teaching and lab space unique. The improved facilities rival those of the newest campus buildings in terms of technology, efficiency and ecological design, Reynolds said, and the campus is targeting LEED certification of the building at the gold level. He said the modified exterior entrances and new landscaping will enhance Centennial Hall's appearance.

"In the backyard we are building a mini-amphitheater that will hold a little over 30 people with a Xeriscape demonstration garden next to it," Reynolds said.

The Science Building was built in 1980 to serve a population of about 5,000 students. In summer 2005, unfinished ground floor storage space was renovated to create four large classrooms. In late August 2006, UCCS administrators presented a program plan for renovations that began June 1, 2009, and are now complete. Besides removing walls and reconfiguring space, the project included installing new network, heating, cooling, electrical and plumbing systems.

University administrators and planners coordinated renovations to the Science Building with other campus construction, as the student population increased and budgets decreased. Centennial Hall is the latest addition to projects that university administrators deemed necessary for UCCS to properly serve Colorado as a regional residential campus. The project joins the Dwire Hall renovation and construction of the UCCS Recreation Center, the Science and Engineering Building, and the Gallogly Event Center as a means to serve a growing student population and meet the campus mission.

In the face of uncertain economic conditions and limited funding, the state of Colorado funded the project through certificates of participation with the debt service covered by federal mineral lease grant funds that are returned to the state. The funds were obtained by the state treasurer for the renovation of the Science Building under legislative authority, Reynolds said.

Many of the faculty and staff for the departments now housed in Centennial Hall are in their new offices. The moves should be complete before the start of fall semester.