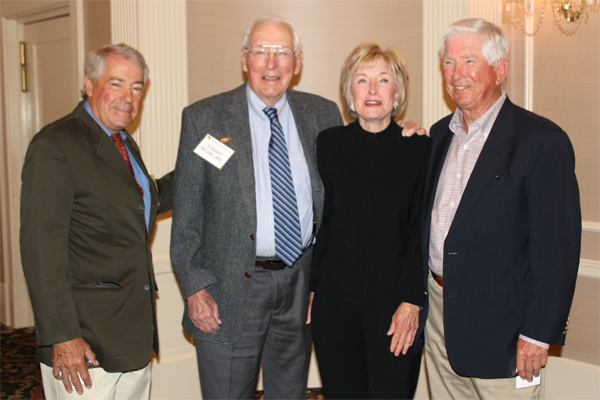 Bill Maniatis, M.D. (CU School of Medicine, ’65), president of the Medical Alumni Association, welcomed 33 medical school alumni and CU staff at a breakfast reception at the Denver Country Club and spoke about the importance and value of giving back to the university that helped launch their careers.

“We are here in this room today because we all share a common cause, and we want these stories to be an inspiration to you,” Maniatis said.

Ed Kinzer, M.D. (CU School of Medicine, ’52) shared how he and four classmates decided at their 50th class reunion to commit $10,000 as a group to the School of Medicine. With CU Advancement staff’s guidance, the Class of 1952 Endowment Fund is projected to reach $30 million by 2052, 100 years after they graduated as medical students, and will last in perpetuity. The Class of 1952 Endowment Fund was created in memory of three classmates who were prisoners of war, as many School of Medicine alumni from this era served in World War II and the Korean War, Kinzer said.

“If we can do it, other people can do it, too,” Kinzer told attendees, adding that he and his friends wished they had created the endowment sooner to capitalize on the time value of money and compounding effect.

Wag Schorr, M.D. (CU School of Medicine, ’63) next spoke about how he and his wife have created a legacy fund with the flexibility to distribute funds from their IRA retirement account upon their deaths to charitable causes such as the School of Medicine. Doing so, Schorr explained, helps minimize hefty future taxes for their heirs while preserving other portions of their estate.

“This solves my desire to say ‘thank you’ and demonstrates my gratitude for having a wonderful career,” he said. “I just feel good.”

Lastly, Clara Winter, M.D. (CU School of Medicine, ’65) spoke about the William G. Winter Award in Orthopedics, which was created in memory of her late husband, a School of Medicine alumnus and professor in the Department of Orthopedics. The medical resident who won the first award in 1999, in a remarkable twist, treated their grandson years later at the University of Utah, where the award recipient now is an orthopedic surgeon.

“This is a wonderful way to honor a loved one or teacher through the mechanics of planned giving as a way to repay the opportunities in education we have had at the university,” she said.

The Medical Alumni Association hosts events like this to introduce alumni to the variety of ways they can support the next generation of medical students and physicians by investing in the School of Medicine’s long-term stability and growth. The association organizes reunions and presents first-year medical students with new stethoscopes at their matriculation ceremony, and, as of 2014, awards $5,000 scholarships to fourth-year medical students.

Tagged with:
alumni, School of Medicine