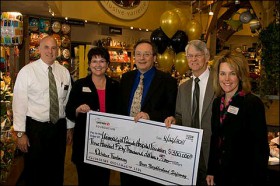 A $350,000 gift from Safeway Inc. will fund breast cancer research at the University of Colorado Cancer Center, bringing total donations from the grocer to more than $1 million since 2008.

The donation comes from Safeway's October 2010 "round up your purchase" campaign at stores in five states, which raised $650,000.

"These seed grants have been highly successful," said Elias, professor of medical oncology at the University of Colorado School of Medicine. "The recipients of the first seven grants made with Safeway donations have now leveraged those smaller amounts into five major grants. We just awarded a second round of seed grants. We are currently recruiting a senior breast cancer scientist to strengthen our breast cancer effort."

Kris Staaf, Safeway director of public affairs, called the effort a great collaboration between the community, Safeway and the center.

"Thanks to the generosity of our customers and employees, we can make a difference in the fight against breast cancer," she said. "We are grateful and humbled by the extraordinary outpouring of support for a cause that impacts so many women and families. The Safeway grants fund groundbreaking research, and we are fortunate to have partners like Dr. Elias and his team at the University of Colorado Cancer Center."

Send your thoughts and suggestions for the Newsletter.
END_OF_DOCUMENT_TOKEN_TO_BE_REPLACED