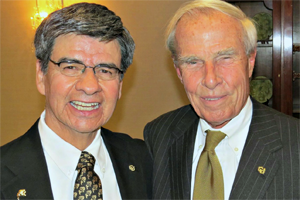 The CU Advocates program honored Alvin Rivera as its first Advocate of the Year at an Oct. 10 reception at the Denver Country Club.

The event, attended by about 100, marked the second anniversary of the launch of CU Advocates, a network of people engaged in grass-roots support of the university.

Rivera received the award from CU President Bruce D. Benson, who hosted the event with his wife, Marcy.

Benson recognized Rivera for the “enthusiasm, passion and action” he brings to his role as a CU Advocate. He noted that Rivera has worked with CU’s Government Relations team to build support from elected officials on bills important to CU. Rivera co-chaired two events in Pueblo, where he lives, welcoming incoming CU students, and another event focusing on prospective students, including those in CU’s pre-collegiate program.

Rivera told of how his admission to and graduation from CU-Boulder represented “a dream come true,” and that he credits much of his life’s achievements to the work he undertook while earning his doctorate. 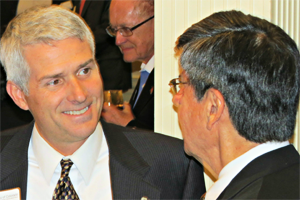 CU Board of Regents Chair Michael Carrigan and Rivera.

Rivera’s career has included serving in administration at the University of Denver and the University of Texas-El Paso. He contributed to numerous civic and governmental entities and served in education capacities for Presidents Clinton and Carter.

“The higher education I received at CU led me to a better quality of life with societal benefits we tend to overlook, and it has enabled me to impart my knowledge to improve our community,” he said.

“If we can all mobilize to strongly advocate for higher financial support of our higher education system, our voice could have an impact.”

Benson said the CU Advocates program now counts 2,300 members, with 1,800 in Colorado and the rest around the world.

He praised Advocates for the many ways they have acted on CU’s behalf, such as contacting elected officials, attending informational programs and contributing opinion writing to newspapers and other media. 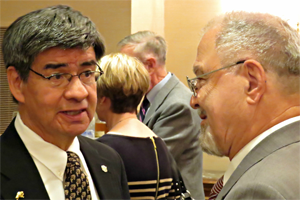 “CU Advocates is an important part of the CU reputation puzzle,” Benson said. “We need Coloradans in their communities, in businesses and even around the dinner table, to talk about the great work CU is doing to influence education, research and service. It is these types of stories that help define the value of CU with the public.”

Joining members of the Advocates program at the event were CU Regents Steve Bosley, Kyle Hybl and Sue Sharkey, and Board Chair Michael Carrigan, who thanked advocates for their work on behalf of the university.