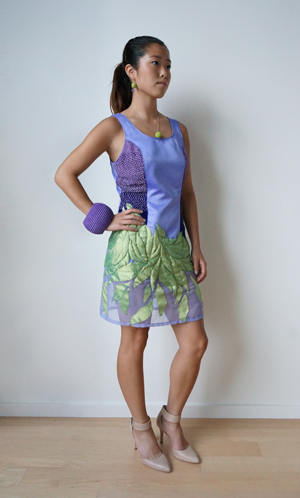 On a whim, Georgia Charkoftaki, Ph.D., a visiting research associate at the Skaggs School of Pharmacy and Pharmaceutical Sciences​ on the CU Anschutz Medical Campus, submitted an application to participate in a national fashion competition that brings together scientific discovery and fashion inspiration in an innovative runway event.

The competition, titled Descience, is organized by the Massachusetts Institute of Technology, and pairs together one scientist and one designer. The scientist provides images and ideas that are the inspiration for a runway look and culminates in a runway show in September.

With a penchant for fashion and a passion for science, Georgia says, “this seemed like a unique way to convey the research I am working on.”

After obtaining advice from her supervisor Melanie Joy, Ph.D., Georgia uploaded slides and a description of the research she and Dr. Joy’s lab are involved in – drug delivery and discovery for the kidney disease lupus nephritis – then promptly forgot about her submission. 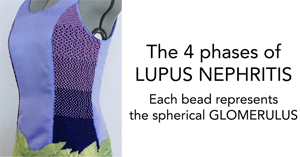 “Unfortunately there are few medical options for lupus nephritis. So, trying to come up with a drug and delivery mechanism that attacks the disease and keeps healthy tissue healthy is a challenging goal,” says Dr. Joy.

A few months after her submission, Georgia received word that she and her research had been selected. Paired with designer Lilian Kong, they named themselves NanoNephron, and became one of 61 participating teams. “I really didn’t know what to expect, but it’s been fascinating,” says Lilian. 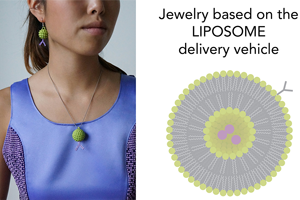 Working via e-mail and Skype, the two collaborated long-distance to create an entire look including cocktail dress and jewelry that together represent the scientist’s work and the designer’s vision.

“First you have to explain the science, which can be challenging, especially to a non-scientist,” says Georgia. Impressed by Lilian’s ability to grasp scientific concepts and translate them into something wearable, Georgia “came to the conclusion that both fields require the ability to make leaps in knowledge. In some ways we think very alike, but differently. She thinks in terms of form. I think in formulas.”

The two went back and forth discussing the science and refining the concept and design. The jumping-off point was a slide of the disease, which established the main color and pattern of the dress. Incorporating color and texture into her design, Lilian has been able to show – through her design – how different parts in the kidney are affected by either the disease or drug-induced injury. There are even cutouts that represent the kidneys and gradual color and pattern changes show how current treatments can cause side effects and injury to other cells.

The research that Georgia and her team are conducting focuses on delivering drugs to specific sites in the kidney rather than blasting the disease with medication and exposing all tissue to strong drugs that can damage other cells. The jewelry symbolizes the targeted delivery approach Georgia is working on; the dress represents the disease and affected cells.

With this approach, scientists design a vehicle to contain the drug and move it to the targeted site in the kidney, bypassing all other tissues.

“Our goal is to provide a new perspective and hope to lupus patients,” says Georgia.

With the garment designed and photos submitted in July, the last step in the competition is judgment day and the runway show, where 15 of the looks will be showcased. The judges are two Nobel Prize winners in science, the executive director for Boston Fashion Week and the design director at Tiffany & Co.

Even if NanoNephron does not make it into the final 15, the team still has an opportunity to qualify for the final runway show by being named the “People’s Choice.” Visit www.fashiondescience.com/#1desciencevote/cmk to check out the looks and vote for NanoNephron to compete in the runway show. Voting ends Sept. 14.

Send your thoughts and suggestions for the Newsletter.
END_OF_DOCUMENT_TOKEN_TO_BE_REPLACED