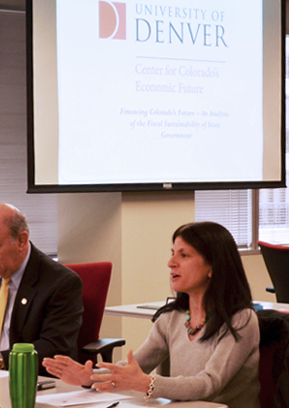 Phyllis Resnick of the Center for Colorado's Economic Future presents a University of Denver study on government funding at Wednesday's Board of Regents meeting. Photo by Cathy Beuten/University of Colorado

A study by the University of Denver presented Wednesday to the CU Board of Regents contends the revenue structure in Colorado is broken. Phyllis Resnick, Center for Colorado’s Economic Future at DU, said that even if Colorado were not entrenched in its worst recession in 70 years, the future of the state’s revenue stream and the funding of programs such as higher education would still look bleak.

“We have a long-term problem; we think the problem is structural,” Resnick said.

The report explored forces that will drive revenue productivity and state government to 2025 and after, reflecting the growing imbalance between projected General Fund revenues and the projected cost of programs. “Even if we have robust recovery, we still have a problem in year 2025,” Resnick said.

Estimated growth in Medicaid – because of the aging baby boomer population – and an increased dependence on state funding for K-12 education will continue to absorb a larger percentage of the state’s General Fund. By 2025, health care costs are expected to increase 213. 9 percent and education increases are anticipated at 120.3 percent. Comparatively, revenue growth projections were only 82.5 percent – and that’s optimistic, Resnick said. A silver lining is that corrections, the third component of the “Big Three” programs the state is federally required to fund, is expected to remain stable.

Previously, K-12 was 65 percent funded by local governments and 35 percent by the state. That has flip-flopped, Resnick said.

The rate of growth of Medicaid is trending away from natural revenue growth as Colorado’s baby boomers begin to retire.

“We have had an influx of the baby boomer generation that is two and a half to three times the national average,” Resnick said. “In addition, baby boomers are moving their parents here” to assist in their care.

In 2024, revenues to the state will only be able to cover the Big Three. In 2025, general funds will not be able to cover even those programs. “Things we’ve passed in the early 1990s have left us with a system that is failing us economically.”

The study recommends structural changes to balance the revenue disparity:

Resnick stressed the gains from implementing the structural changes would stabilize the budget and would not restore cuts to programs such as higher education.