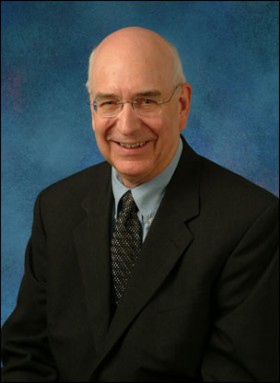 A nationally renowned pediatrician and geneticist, Edward R.B. McCabe, M.D., Ph.D., has been tapped to become the first executive director of the Linda Crnic Institute for Down syndrome at the University of Colorado School of Medicine.

McCabe brings unparalleled experience and a lifelong commitment to pediatric genetic disorders to his new position headquartered on the Anschutz Medical Campus. He is leaving a distinguished position as physician-in-chief and executive endowed chair in pediatrics at the Mattel Children's Hospital at UCLA.

The Linda Crnic Institute for Down syndrome has the single focus of eradicating the medical and cognitive ill effects associated with Down syndrome and is the first organization to comprehensively address basic research, clinical research and clinical care, all under one umbrella. The Institute is made possible by the generous support of founding donors Anna and John J. Sie, whose granddaughter Sophia was born seven years ago with Down syndrome. The Anna and John J. Sie Foundationhas committed $22 million dollars to establish the institute as the worldwide beacon for research and care.

"Down syndrome is the least funded genetic condition by our National Institutes of Health and there is no medical registry or biobank," said John J. Sie. "We are thrilled with Ed McCabe's appointment and we believe that he will herald in a new era for people with Down syndrome on many levels."

Said McCabe, "The goal of the Linda Crnic Institute is to improve the lives of individuals with Down syndrome through service, care, education and research. We have the technology today to make a huge difference both medically and cognitively and we hope that the institute will become a magnet for world-class clinicians and researchers who can bring new discoveries and care to people with Down syndrome and their families."

The Global Down Syndrome Foundation, established in 2009, is a public nonprofit that is dedicated to raising an additional $12 million over 10 years for the Institute. Last year, with the help of the institute's international spokesman, music icon Quincy Jones, the Global Down Syndrome Foundation raised critical awareness and money for the Institute.

"Families with a prenatal diagnosis of Down syndrome or who have children with Down syndrome will want to come here to the Linda Crnic Institute at the Anschutz Medical Campus," said M. Roy Wilson, chancellor of the University of Colorado Denver. "This new resource is where care and research are truly making a difference now and is where lives will be changed for the better in the future."

In 1986, he moved to Baylor College of Medicine as associate professor then professor, and director of the Robert J. Kleberg Jr. Clinical Center in the Institute for Molecular Genetics. He established the Baylor Mental Retardation Research Center, the Baylor Molecular Genetics Diagnostic Laboratory Postdoctoral Training Program and the Baylor Child Health Research Center. Currently, he is professor in the departments of pediatrics and human genetics at UCLA and the Mattel endowed executive chair of the department of pediatrics, David Geffen School of Medicine, and physician-in-chief of the Mattel Children's Hospital at UCLA. He is professor of bioengineering, Henry Samueli School of Engineering, UCLA and member, California Nanosystems Institute.

School of Medicine Dean Richard Krugman, M.D., welcomed his distinguished colleague to the Anschutz Medical Campus saying, "Ed McCabe will be a wonderful leader for the Linda Crnic Institute. He is an accomplished academician in pediatrics and has the administrative skills to lead this very important multidisciplinary, multicampus effort to ameliorate the adverse effects of Down syndrome." McCabe begins at the Institute on Aug. 1.

The move to the institute is a return to the University of Colorado School of Medicine for McCabe. It also is a return to Castle Rock and a chance to be closer to his and wife Linda's ranch. The McCabes own the Doublestrand Ranch, where they raise and breed quality paint horses. They also teach an introduction to genetics curriculum to middle and high school students in Castle Rock.

Send your thoughts and suggestions for the Newsletter.
END_OF_DOCUMENT_TOKEN_TO_BE_REPLACED