At the conclusion of the diversity inventory presentation by Kathy Nesbitt, vice president of employee and information services, members of the CU Board of Regents last week expressed differing expectations of what they thought the process and outcomes should be, and decided to address the discrepancies before furthering the plan.

As presented to the board at its June 21-22 meeting at CU Boulder, the inventory would include programs in which the university invests at least one full-time equivalency on an ongoing basis focused on recruitment, retention and completion of undergraduates in traditional diversity categories. It would not include academic units and degree programs, student-run programs, grassroots efforts with no significant university support, or financial aid programs.

“The goal is to focus on the diversity programs that we have in the university and to look at who is managing them, what is the charge or group they are trying to affect, where they are located, how are we providing dollars and then how are we measuring those particular programs,” Nesbitt said.

Regent John Carson, R-Highlands Ranch, asked why the plan didn’t include academic programs and what was being done about assessing political and philosophical diversity.

“It’s just frustrating to me that we never seem to get a handle on the whole intellectual diversity issue,” he said.

Nesbitt and Michael Lightner, vice president of academic affairs, explained such an inventory would be too vast and unwieldy. They said the proposed inventory was a starting point that would give each campus insights into what is taking place on their own campus, as well as the others.

Regent Heidi Ganahl, R-Superior, said the plan presented was nothing like what she and Carson had anticipated.

“There are so many programs and so many dollars such as our resources and staff and energy being spent on diversity within our system that we wanted to understand what that looked like in real life,” Ganahl said. “What are the programs, what are we spending on them, how are we measuring success? Because if they’re not successful we can move the dollars to other places where we are seeing success.”

Regent Irene Griego, D-Lakewood, thanked Ganahl for sharing that insight, saying that was the first time she had heard of it. She said looking at diversity from a multicultural lens would yield the greatest benefit.

Regent Glen Gallegos, R-Grand Junction, asked how much input the chancellors had provided and what they felt were the desired outcomes. All four chancellors agreed they had played an extensive role in the inventory plan, and the plan as presented would be highly valuable for them to better understand the dynamics of diversity on their own campuses, as well as share insights with one another.

“For the chancellors, the most important value shared by the report was going to be to the chancellors and the institutions themselves,” said CU Denver Chancellor Dorothy Horrell. “But if we’re not in agreement about that, we need to go back and get some clarification so that we’re not all over the map and spend so much time and resources for something that may not hit the mark.”

Before diving into the diversity inventory presentation, Patrick O’Rourke, vice president of legal counsel and secretary to the board, explained the differing definitions of discrimination, diversity and inclusion.

“We need to make sure that when we’re using the terms, that we’re getting them right,” O’Rourke said.  “Words really matter when we’re talking about diversity, discrimination and inclusion. These are related concepts but they’re not the same.” He said it is imperative that people use the correctly defined terms. “Otherwise we run the risk of being on different pages about what it is we’re doing.”

Discrimination: When someone has been given protections under the law and the individual’s rights are intentionally violated through adverse action taken against that person.

Diversity: The distinct and varied population of people who are part of your community, accepting the differences among them. “We are trying to build a community that is not based on looking at people based on a single characteristic,” he said.

Inclusion: The environment created, whether people believe there is a common purpose they understand and are invested in as well as trust and the appreciation of individual attributes. Inclusion can prevent discrimination and increase and support diversity, O’Rourke said. 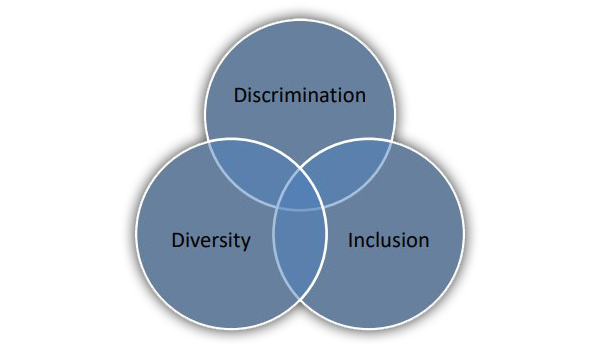