Three University of Colorado faculty members were recognized by the Board of Regents as Distinguished Professors, the highest faculty honor at the university.

Each received a standing ovation on Tuesday, the conclusion of the board’s two-day meeting on the Auraria Campus. 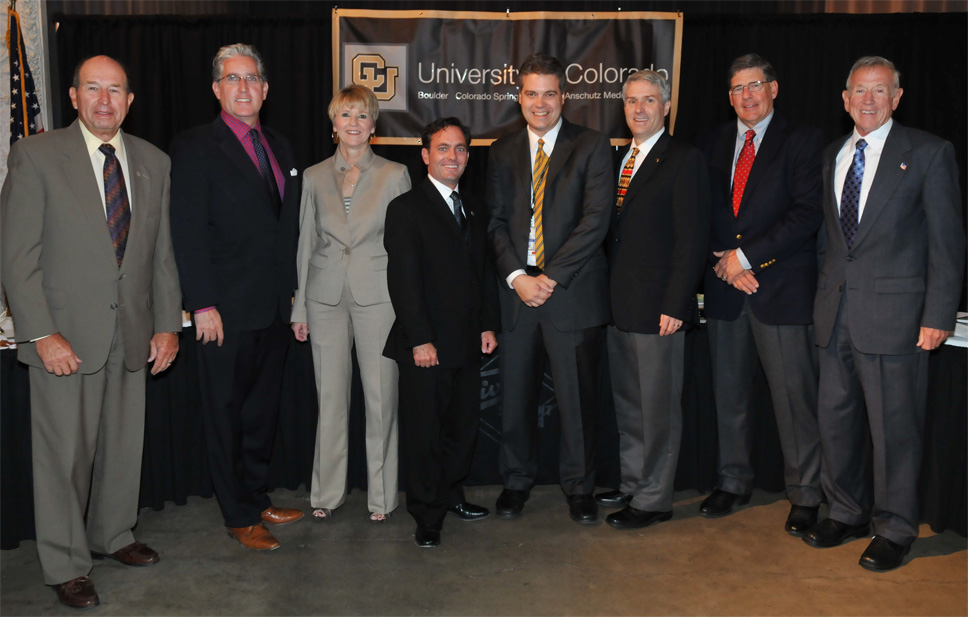 Also at this week’s meeting, Joseph Kay, M.D., assistant professor in the University of Colorado School of Medicine, was officially presented with the Chase Faculty Community Service Award, which was announced earlier this year.

Distinguished Professors are faculty members who are leaders in their fields and are recognized for their outstanding contributions in teaching, research and distinguished scholarship or creative work.

Cascio, who has been teaching for 30 years at the Business School and holds the Robert H. Reynolds Chair in Global Leadership, received the appointment for his service to CU and to the field of human resources management. He was described by nominators as someone who makes complicated lessons simple. He has an uncanny way of knowing if students don’t understand – then works to ensure that they do. Cascio has written 10 books and more than 100 scholarly articles and is considered a leading expert on organizational downsizing.  He has won numerous honors, including the highest award in his field, the Michael R. Losey Human Resource Research Award, and is one of only two U.S. citizens ever to receive an honorary doctorate from the University of Geneva.

“I came here to build the Business School,” he said, adding he had settled into a successful career at a top-tier California institution before being recruited by then-CU President Arnold Webber.

Cascio credited his success as a teacher and researcher to the collaborative environment he shares with his colleagues. “In business schools, people don’t often do interdisciplinary studies, where you cut across academic disciplines,” he said.

“All I ever wanted to do was to be a good teacher and have the opportunity to sink my teeth into tough problems. I am grateful the university has given me the autonomy to do this.”

DeLeon, who has provided strong leadership for more than 25 years, was recognized for his contribution to CU and the field of public policy. Considered a national and international leader in public policy analytics, he has been a major figure in shaping South Korea’s current public policy. His work has greatly contributed to the school’s rise in national recognition.

“I hope I’ve fulfilled the promise of my original hire,” he said. “I was surprised to see, from Dean Paul Teske and my peers, that the parts of me are much greater in sum than I ever imagined.”

Professor Nancy Kinney of the University of Missouri, St. Louis, wrote of deLeon, “One of the things I … admire about his teaching was the pure enjoyment derived from intellectual activity. He had a way of pursuing lines of inquiry in the classroom that often made such explorations unpredictable but, more importantly, pleasurable.”

Traystman was recognized for his contribution to CU in the field of cardiovascular and cerebrovascular physiology. Traystman’s work includes 500 peer-reviewed manuscripts and 300 national and internal presentations. His research has led to current procedures for pediatric resuscitation.

“I’m very pleased and humbled by this award,” he said. “Every year as I get older, my interest (in the field of cardiovascular and cerebral vascular physiology) becomes more and more piqued. Hopefully we’ll find something in the future that will help me and all the people in this room when it comes to heart attack or stroke.

“We have made headway. As a translational researcher, I like to take things from the bench and bring it to the patient. The University of Colorado has allowed me to do that the past years and hopefully into the future.”

Kay was saluted by Regent Michael Carrigan and Lawrence Hergott, M.D., for his humanitarian service and tireless support to the medically underserved by establishing a cardiology clinic for the indigent. The Chase Award includes a $10,000 endowment.

Hergott called Kay “the hardest working man in the division of cardiology at the University of Colorado School of Medicine,” acknowledging his commitment to treat patients with congenital heart disease. That commitment extends beyond the hospital as, with the help of the Metropolitan Community Partners Network, Kay has extended his care to those without insurance, bringing lifesaving care within their reach.

Kay explained that his determination to open a clinic deepened after seeing a patient who’d suffered a heart attack. The man was working full time, but after the heart attack was going to lose his job. Because Kay wasn’t allowed to see this patient after caring for him because he was uninsured, he inspired Kay to create the clinic to help the indigent and underinsured. He and other colleagues meet patients once a month to provide cardiac care.

Tagged with:
Auraria, Board of Regents, Distinguished Professor