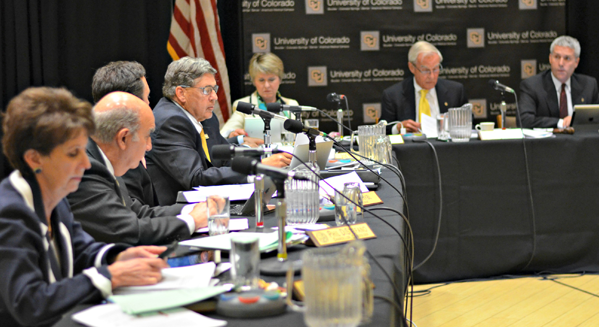 Regent James Geddes speaks during discussion on the climate of diversity on CU campuses. The board voted June 20 to pursue a survey on the topic. Photo: Cathy Beuten/University of Colorado

Regent James Geddes speaks during discussion on the climate of diversity on CU campuses. The board voted June 20 to pursue a survey on the topic. Photo: Cathy Beuten/University of Colorado

The University of Colorado Board of Regents on June 20 called for a survey of the climate of diversity on CU campuses, voting 8-0 after a lengthy discussion that focused on CU-Boulder.

During the meeting at the University Memorial Center on the CU-Boulder campus, current and past faculty members from CU-Boulder made comments to the board about personal experience and perspectives largely regarding political tolerance, a topic that’s the key element of the resolution, introduced by Regents James Geddes, R-Sedalia, and Sue Sharkey, R-Windsor.

They also introduced a resolution that would have prohibited discrimination based on political affiliation or philosophy, but Geddes withdrew it after board members expressed reservations about the process, and suggested instead it first be reviewed by the board’s Laws and Policies Committee.

“Neither resolution is designed to impose an ideological agenda upon the University of Colorado, its campuses or its faculty,” Sharkey said.

The resolution as passed by the board directs the university to pursue a survey and calls for an “objective and nonpartisan evaluation by a professional, external survey company to assess the efficacy by which the University of Colorado campuses have implemented the principle that they ‘respect diversity in all of its forms, including diversity of political, geographic, cultural, intellectual and philosophical perspectives,’ as well as diversity based on race, color, national origin, sex, age, disability, creed, religion, sexual orientation and veteran status.”

The regents said they want to review survey proposals from nonpartisan firms at the board’s September meeting.

Before the vote, during more than two hours of discussion on the topic, Geddes presented comments from former CU-Boulder faculty member Donald Downs and a current faculty member who Geddes said did not want to be identified, but who said faculty with conservative political views “often are in hiding because their views are made fun of by their peers and called stupid and ill-informed.”

Via a video call, Mark Bauerlein, professor of English at Emory University in Atlanta who was a visiting professor at CU-Boulder for a year, described coming to the campus with hopes of possibly pursuing what eventually became the Visiting Scholar of Conservative Thought and Policy, but said he left disillusioned after he was described as a polemicist – someone “not to be trusted in the classroom.”

“It was an explicit charge that I’m just kind of a political hack,” he said.

Chancellor Phil DiStefano told the board, “Obviously, Mark didn’t get what he was looking for from his colleagues in the English department, but there was no guarantee there was going to be a position the following year.”

Professor Robert Nagel, who has taught in the Law School for 38 years, said that in his experience, some departments at CU-Boulder exhibit a “homogeneity of political views” which “limits and even degrades the education experience.”

He also said a survey such as the one the regents ultimately supported “would provide a useful basis for an assessment of my comments.”

DiStefano stressed that he’s committed to diversity in all forms, and that the campus follows the Regent laws and policies requiring such diversity – and the freedom of discussion that must come with it.

He introduced Paul Chinowsky, a professor in Civil, Environmental and Architectural Engineering who will chair the Boulder Faculty Assembly beginning July 1, and Patty Limerick, director of the Center of the American West, both of whom described a campus where diversity of thought and discussion is embraced.

“I have never witnessed or encountered any intellectual discrimination on this campus,” Chinowsky said, adding that he doesn’t believe faculty are actively discriminating or advocating for a particular political point of view. “We have one simple objective: to produce thoughtful participants in our society.”

Limerick talked about her long, ultimately successful efforts to have former Secretary of the Interior James Watt speak at CU-Boulder, and the respectful reception he received. She said the idea of instituting hiring preferences based on political belief ultimately wouldn’t be constructive, if even possible.

“By all means, encourage division of opinion at the university,” she told the regents. “But when it comes to setting priorities for hiring, encourage the hiring of problem-solvers. … Put a premium on professors who will … pause to reconsider their assumptions.”

Regent Irene Griego, D-Lakewood, mentioned her background in multicultural education, and said she agrees that “we have to have multiple perspectives.”

“I value that all voices need to be heard, not just liberal and conservative,” she said.

Geddes summarized his pursuit of the issue by saying, “The quality of education is at stake.”