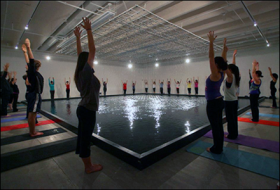 Attendance at UCCS Galleries of Contemporary Art (GOCA) events in the 2011-2012 season exceeded 9,000 visitors and contributed an estimated $540,000 to the local economy, according to GOCA managers and local arts experts.

For 30 years, the Galleries of Contemporary Art has operated from its campus location in Centennial Hall. Three years ago, GOCA began programming space in the Plaza of the Rockies Building, 121 S. Tejon, donated by the Nor’wood Development Group. The two locations are known as GOCA 1420 and GOCA 121 respectively.

“The downtown space is really coming into its own,” McConnell said recently. “We estimate 60 percent of our total attendance was at GOCA 121. It’s visible, accessible and is providing us a different cross-section of the community.”

McConnell explained that GOCA 121 provides an opportunity for the university to interact with downtown visitors who stop in while on their way to restaurants, special events or while conducting business. GOCA 1420 remains a destination venue for those interested in a specific exhibit or faculty, staff or students who are already on campus.

In the past year, GOCA was part of community events such as the Cool Science Festival, the Whatif? Festival, and First Friday Art Walks in addition to providing its own original programming. The decision to be part of community-driven events helped generate more visits and broaden the audience base. Cool Science events on campus brought 587 children and families to GOCA 1420 while the Whatif? Festival downtown brought 750 to GOCA 121. Local funders have taken note as well. Grants for 2012-2013 season sponsorship from both the Bee Vradenburg Foundation and the Pikes Peak Community Foundation, each for $3,000, demonstrate the community’s support for GOCA. 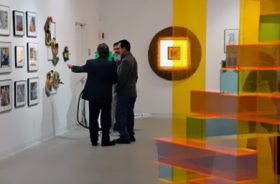 “Collaboration and strategic partnerships are keys to our current — and future — success,” McConnell said.

“We had a great year,” McConnell said. “I am deeply appreciative of the partnerships that were created on campus and in our community that led to this success. But I know we can do more in 2013.”

Tagged with:
Galleries of Contemporary Art