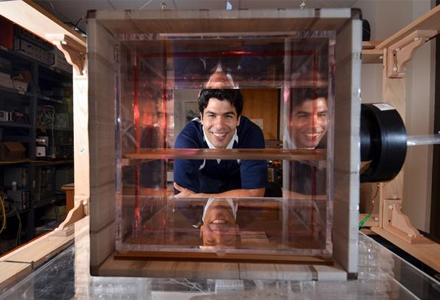 The strength of magnetic fields inside biological incubators can vary by orders of magnitude from one incubator to the next as well as from one location to another inside the same incubator, a finding with direct implications for some biologists, according to a new study by a recent University of Colorado Boulder graduate, who also patented a solution.

The findings, published this month in the journal Bioelectromagnetics, offer another possibility for explaining why cells sometimes behave differently when grown in identical incubators. Biologists have assumed that those differences, including rates of growth and death, are due to natural variation but it’s possible that differing exposures to magnetic fields may play a role.

Incubators are ubiquitous fixtures in biology labs worldwide because they are essential equipment for growing and maintaining cell cultures. They most often resemble small refrigerators.

“Researchers expect that the conditions inside incubators — like the temperature, humidity, light and concentrations of oxygen and carbon dioxide — are homogenous,” said Lucas Portelli, lead author of the paper, “because the most important thing is that you can replicate the experiment.”

The results of the new study also have direct implications for biologists who are trying to study the health effects of exposing cells to electromagnetic radiation, which can be emitted from a number of sources, including high-voltage power lines and cell phones. Those researchers need to have a “clean” electromagnetic field environment where they can carefully control the magnitude of the fields bathing the cell cultures to successfully carry out experiments.

Portelli, who earned his doctoral degree in December from CU-Boulder’s Department of Electrical, Computer and Energy Engineering, stumbled across the problem while trying to study the effects of magnetic fields on the bacteria E. coli.

“Every time I opened an incubator, I measured something different,” Portelli said. “I thought, ‘Is it just me or is this a widespread problem?’ It was hard to answer the question with just anecdotal data.”

Portelli built a variety of probes that can measure the magnitude of the magnetic field in the exact location where cells would be cultivated. He and Theodore Schomay, an undergraduate student majoring in both physics and mathematics, then set about knocking on the doors of biology labs across campus, asking for permission to measure the invisible fields.

What the pair found, after placing the sensors in 27 locations within each of 21 incubators, is that the magnitude of the magnetic fields varied far more than expected. They also found that the magnitudes of the fields measured frequently fell outside the range that would occur naturally outside, due to the Earth’s own magnetic field, or in most inside spaces, such as homes or offices, where electricity creates its own field.

Part of the problem, Portelli said, is that equipment built into the incubators such as fans, heating elements and sensors can generate their own electromagnetic fields. Even the magnet that keeps the incubator door shut creates a field.

To address the problem, Portelli went to work building a shield that can fit inside an incubator and protect the specimens. The challenge, Portelli found, was building a box that could entirely block the fields while still allowing easy access for the researcher.

Critically, the shield would also have to be easy to clean. Because incubators are designed to provide an environment that’s especially hospitable to microorganisms, hinges, latches and other features that create difficult-to-clean nooks and crannies can quickly become bacterial breeding grounds. Those bacteria can then contaminate future experiments in the incubator.

Portelli’s solution — a four-sided box that nests within another four-sided box — has been patented by CU’s Technology Transfer Office. The ultimate idea, Portelli says, is to have that technology integrated into the manufacture of future incubators.

“As scientists work to explore biological systems more deeply and, therefore, look for smaller or more subtle effects, electric and magnetic fields may become another environmental factor that we have to control just as we do with temperature and humidity,” Portelli said.

Launching a career in space

New technique could slash energy used to produce many plastics

Send your thoughts and suggestions for the Newsletter.
END_OF_DOCUMENT_TOKEN_TO_BE_REPLACED