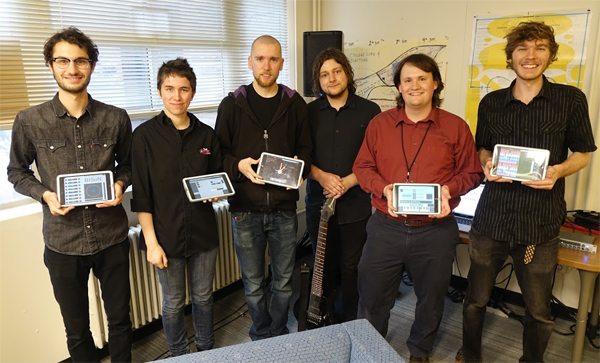 Among the sessions scheduled for next month’s 19th annual Colorado Learning and Teaching with Technology (COLTT) Conference is an in-depth seminar, “iPad Quintet: An Academic Swiss Army Knife.”

Session leader Hunter Ewen is a dramatic composer, educator, and multimedia designer who teaches students strategies for digital creativity as instructor of critical media practices in CU Boulder's College of Media, Communication and Information. His music and multimedia work have garnered numerous awards and performances. The COLTT session will feature live demonstrations and performances as well as in-depth explorations of what it takes to create a student-driven digital performance ensemble.

Q: What are the goals of the iPad Quintet? 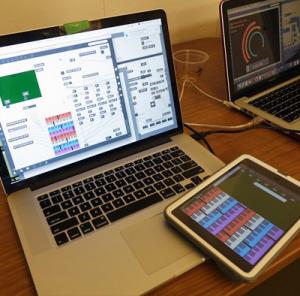 A: It’s such a new ensemble that every time we do a performance we try to do a new collaboration, new technical workflow, and new hardware and software set up. So we don’t know exactly how it’s going to work yet or who will be our most meaningful collaborative partners. But the plan right now is to involve as many people as possible and to present as many concerts in as many different ways as possible. So we are working with the visual arts, with people from dance, from music, obviously people from CMCI, but like I said, with each new iteration we’re trying to do something new with the thought that the exploration right now is more meaningful than refinement.

Q: In reviewing your session description it finally clicked that the iPad Quintet is actually composed of humans.

Q: Where does the iPad Quintet perform?

A: We perform all over. Last semester we performed in ATLAS, we’ve performed in the Environmental Design Building, and we have plans to take the show on the road in the next year. We have a few performance opportunities at festivals, conferences, things like that.

Q: What sorts of technologies and equipment do you require to perform? 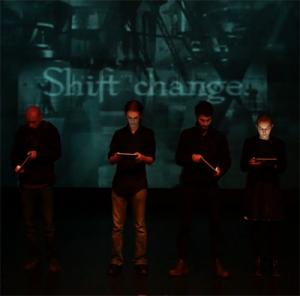 A: Critical Media Practices has been very kind to us. A big part of what they do is investigate new technologies. In order to do that, they need to have new technologies. As our iPad Ensemble slowly evolves and gets into other things – maybe dome projection, or virtual reality, or other cutting edge methodologies – we are confident we will have their help with what we need as long as we bring the interest and passion.

Q: How do your group performances translate to an educational platform, in this instance, a conference seminar?

A: First and foremost it’s exposure and trying to find meaningful ways of showing people that this can be done – and by young people, and people without a technical background. An interesting thing about the ensemble is that they are not all computer programmers. They’re not all even trained in music. We have people trained in dance, in visual art, and knowing that you can bring that diverse a group together and have a meaningful creative collaborative outcome is important. It’s also meaningful for a teacher to know that this is within the realm of possibility and not an overly expensive or overly technical venture. It requires some programming expertise and experience, but is accessible.

First we demonstrate what is happening so you can see and hear music, sound and stories being told in new ways. After that we try to let people behind the curtain and show them what kinds of resources they need, how long it might take to learn and achieve, and demonstrate that students be hands-on in developing new material and interfaces, composing new music and story ideas, taking pictures and videos. Three members of our quintet have taken one official class in the kind of programming language that we use and two have not. And it doesn’t matter. When everyone gets together it becomes very creative.

Q: What programming technology is used?

Q: What makes your iPad Ensemble stand apart from a typical laptop ensemble? 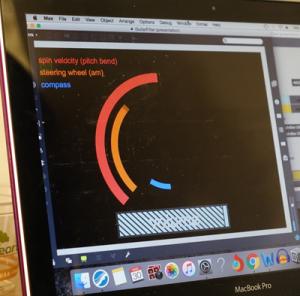 A: The thought behind the iPad Ensemble is to get the performers out from behind the laptops and force them to move to actuate things. The iPads not only have buttons and knobs and sliders and things that are built in virtually where you touch it to move them, but they also have the acceleration of the iPad itself. So as people move around you can, say, throw a sound by turning the iPad in a certain direction, or maybe turn it into a steering wheel that controls some filter or some sound. You can throw it up in the air, ring it like a bell, shake it like an Etch A Sketch, and all these movements can be programmed to do different things. If you look at some of our videos online you’ll see the practices the students are coming up with involve mimicking the behavior and gestures they observe in others. Also, the programming can be changed for each performance. For example, at one performance spin speed controls something, and you have members of the ensemble spinning around like whirling dervishes, or maybe the iPads are on chairs and the chairs spin around. Then maybe the parameters are different for the next performance and compass bearing controls something. Maybe as the ensemble member faces north something happens or they get a certain suite of buttons to use and if they face south they get another suite of buttons. When the audience sees people moving in a very careful and particular way, rotating, shifting and accelerating in different directions, then can hopefully correlate this to what they hear.

Q: What are the takeaways that attendees of your COLTT workshop may expect?

A: There are specific takeaways and more general takeaways. A specific takeaway would be discovering how accessible this kind of technology is – fostering excitement and enthusiasm for exploring new ways of storytelling. A general takeaway goes beyond an iPad Ensemble and using Max as a programming language. It is a kind of paradigm shift towards new ways of self-expression, and on top of that, fostering new ways for students to be expressive.

The iPad Ensemble model I have created allows students the freedom to pick subjects that interest them, to find text and video meaningful to them, programming their own interfaces and asking themselves, “Do I want a clock face? Do I want to rotate? Do I want buttons and sliders? Do I want to be jumping up and down or spinning around to tell this story?” Leaving these sorts of questions up to the students is a new way of looking at electronic music and media. We get so bogged down in technology and it becomes so daunting that a lot of times we are not willing to give control of that over to the students, but they are very capable of learning and doing this all on their own. Even grade school and high school students can learn to program in Max, use these iPad applications, and to integrate them as a mechanism for interdisciplinary collaborative storytelling.

There is a real excitement for this kind of student-driven creative narrative. This is what I want to get across beyond anything else. Even if you don’t understand how it works or haven’t heard of it before, or if it seems beyond your or your students’ capabilities, it’s not. It’s more accessible and less expensive now than it ever has been and it’s absolutely possible for people to use. 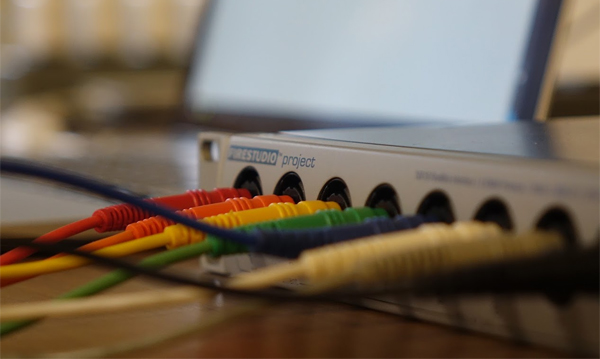 Tagged with:
students, COLTT, College of Media Communication and Information