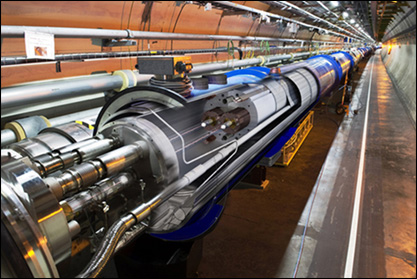 A group of University of Colorado at Boulder physics department faculty and students involved in the Large Hadron Collider project are celebrating the recent restart of the world's brawniest particle accelerator near Geneva.

A faulty electrical connection between two of the accelerator's magnets only nine days after the original launch Sept. 10, 2008, halted the project for 14 months of investigation and repair. Physicists have now resumed low-intensity particle circulation and hope to transition into full operational capacity in 2010 if the relaunch continues to go smoothly.

The Large Hadron Collider project sends protons and charged atoms whizzing around a 17-mile underground loop on the border of France and Switzerland at 11,000 times per second — nearly the speed of light. Located at the European Organization for Nuclear Research facility known as CERN, the collider will smash particles together at energy levels seven times higher than the previous record by accelerators.

Scientists will use the accelerator to attempt to re-create conditions immediately following the Big Bang, searching for answers about mysterious dark matter, dark energy, gravity and the fundamental laws of physics. The experiments may even shed light on the possibility that other dimensions exist, according to physicists.

The CU-Boulder team has been working with the CMS "forward pixel detectors," which Cumalat called "the eyes of the device." The forward pixel detectors will help researchers measure the direction and momentum of subatomic particles following collisions as they penetrate roughly 25 million different silicon elements, providing clues to their origin and physical structure, he said.