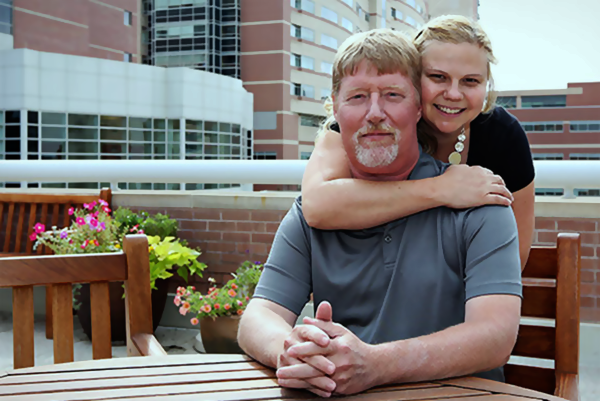 On Dec. 17, 2011, 48-year-old Brian Sherry was folding laundry when he first experienced an unusual electric sensation on the left side of his chest. A veteran elementary school teacher, Brian is an easygoing guy with a wry sense of humor and a passion for producing homemade wine. He walked upstairs, took a shower, sat down at his computer and searched “heart attack” on WebMD.

That call began a three-year medical odyssey for Brian Sherry. Today, he has a new heart and a new wife, who has her own story to tell about heart transplants.

At Parker Adventist Hospital, surgeons opened Brian’s chest and discovered a mysterious bacterial growth had invaded his heart. Before long, he found himself transferred Porter Hospital. Confident that an otherwise healthy man couldn’t be seriously ill, he set out to convince the staff he should be discharged.

That strategy changed when a cardiologist from the University of Colorado Hospital (UCH) on the Anschutz Medical Campus stopped by his room.

Instead, he moved to UCH, one of seven hospitals within the University of Colorado Health system, where he started to get some answers from physicians, including  Joseph Cleveland, Jr., MD.

“He had developed an infection of the aortic valve,” Cleveland said. “The bacteria had grown into a mass of vegetation. Part of the mass had broken off creating an embolism in the left anterior descending coronary artery. I’m really surprised he survived the initial heart attack.” 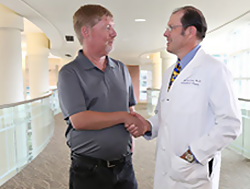 “In the Rocky Mountain corridor, between Canada and Mexico, we are it,” said Joseph Cleveland, Jr., MD. “We are part of all clinical trials for the latest devices, we have the right specialists and team to deal with complex patients like Brian and we have access to anything that is possible with advanced heart failure therapies.”

“He was always positive,” Brian said. “He had my heart in his hands, but he was just another person. I’m so happy he was my doctor.”

UCH doctors set out to unravel the mystery of the bacteria by sending a sample to the Mayo Clinic. They tried to repair the aortic valve, but Brian’s heart had been so profoundly weakened by the infection, it could no longer keep him alive. During a six-week stay in the intensive care unit, his heart stopped twice.

“It was just like somebody turned the lights out,” Brian said. “One minute there were two nurses in the room giving me a sponge bath, and then my heart stopped and everything went black. When I came to, there were 25 people in the room.” 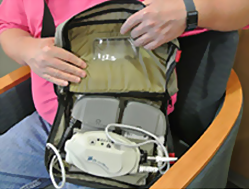 Brian’s only option was a left ventricular assist device (LVAD)— a mechanical heart—which would be implanted under his skin to help pump blood from the left ventricle of his heart to the rest of his body. The LVAD was connected to an external computerized control unit and battery pack through a port in his skin. At night, he could connect to a wall unit. But during his waking hours, he carried the control and batteries everywhere in a messenger bag strung across his chest.

Within weeks after getting the LVAD in January 2012, Brian was back in the classroom at Dalton Elementary in Aurora, Colo., but he knew that he was living on borrowed time. The bacteria remained a mystery, and he was being kept alive by two batteries that had to be replaced with fresh ones every day at the end of school.

“Never change both of them at the same time—that’s the first thing you learn,” he said, with a small smile.

Brian’s biggest concern about the LVAD provided a good indicator of his will to live.

“Here I was, this single guy,” he said. “So I’m thinking, ‘How am I ever going to meet a woman hooked up to this weird machine?’”

Dating with the LVAD 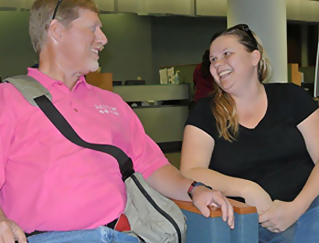 By spring 2012, Brian had learned what had destroyed his heart. It was bacterium Tropheryma whipplei, named after George Hoyt Whipple who first described it in 1907. Commonly called Whipple’s disease, it is an extremely rare infection usually found in the small intestine.

In the United States, Whipple’s disease affects only one in a million people each year. Cleveland had never seen a case before Brian Sherry. To have Whipple’s Disease attack the heart rather than the gastrointestinal system turned Brian into a case for the medical journals.

“The doctors say I’m in a special club—just not a club you want to be in,” he said.

His only hope for survival would be a heart transplant, but before he could even be placed on the transplant list, his physicians wanted to make sure that all the Whipple bacteria in his body had been destroyed. That would take one full year of oral antibiotic treatment.

So Brian began the waiting game, living with the LVAD, taking his antibiotics and never missing a day of school. That’s how he happened to run into Holly, the mother of one his former students, at a school fundraiser. She had heard about his illness and the LVAD was hard to ignore, so when they bumped into each other, the conversation turned to his precarious medical situation.

“I said, If you need food or company, call me,’” Holly said. “I was just a former parent offering help.”

Brian invited her to dinner, a first date like none other.

“He picked me up and even before we got the restaurant, he did an hour of LVAD training with me,” Holly said. “I learned the back-up batteries were in the trunk, but if his heart stopped I should call 911 before I got the back-ups. Also, no chest compressions to get his heart started. Shock yes, compressions no!”

Over their first dinner, Brian continued his campaign of anti-romance. “I told her, ‘Now is the time to run,’” he said. “’Are you sure you want to put yourself through this? I could die.’”

Holly didn’t flinch. “I said, ‘I’m not going anywhere.’ But in reality, I was terrified.”

She had good reason to be scared. 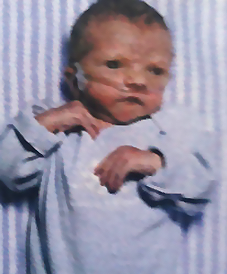 Ten years before Holly and Brian started dating, Holly had given birth to her second child, a son she named Jonathan. It had been a normal pregnancy, so she was not prepared when the baby turned blue just hours after his birth.

Within a day, Holly had to learn about “congenital cardiac myopathy.” Her son had multiple heart defects. His only chance for survival would be a heart transplant.

When he was 12 days old, Jonathan moved to Children’s Hospital Colorado and was placed on the heart transplant list. Holly spent every waking minute in the hospital, watching Jonathan, and waiting for a heart.

One day, when he was 5 weeks old, the baby seemed to be doing better, so Holly and her family decided to take him out of the hospital for a family meal in a restaurant. Jonathan stopped breathing during dinner. A doctor who happened to be there tried to resuscitate him.

“That doctor looked up at me, straight into my eyes, and I knew he had died,” Holly said. “He died waiting for a heart. And when the transplant coordinator at Children’s [Hospital Colorado] asked us if we wanted to donate his organs, of course we said, ‘Yes.’”

Holly had lived through the loss of a child in need of a heart transplant. Now, she was dating a man who also needed a heart to survive.

“How do you let someone go through that by himself?” Holly said. “Maybe I thought this was my second chance at having things turn out differently, but I just couldn’t walk away. I loved him—that was the bottom line.”

Eighteen months after their first date, Brian and Holly got married on a Friday morning. They bought the ring on Saturday. They told their families on Sunday. They didn’t plan any honeymoon.

“Too many unknowns,” Brian said.

After a year on antibiotics, Brian underwent 13 biopsies to prove that he had no trace of Whipple’s disease anywhere in his body. Only after all those biopsies came back clean could he be placed on the transplant list at the end of July 2013. 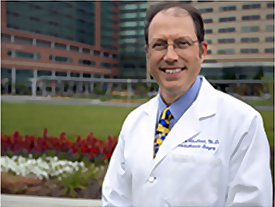 “With a heart transplant candidate, we want to make sure any type of infection is gone,” Cleveland said. “In this case, we erred on the side of caution because the Whipple was so unusual.”

Eight months later, on April 1, 2014, Brian and Holly got the call. One of the 2,200 hearts donated each year in North America was available for Brian. He was already anesthetized when Cleveland held the heart in his hands and decided to call off the surgery because it had calcium deposits.

“It’s really bad to wake up and find out the surgery didn’t happen,” Cleveland said. “The only worse news would be to wake up and not have a good heart.”

Two weeks later, on Easter, Holly and Brian got a second call from UCH. They shoved their Easter turkey back into the freezer and jumped into the car. This time, they didn’t even make it to the hospital before they received another call telling them the transplanted heart would not work for Sherry. They drove home and pulled the turkey back out of the freezer. 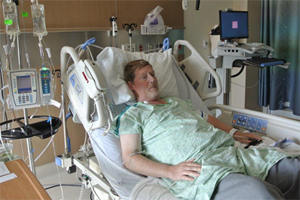 On April 30, Brian was at as school assembly when his doctors called him into the hospital. They suspected there was a blood clot in the LVAD—a life-threatening development. Sherry was admitted and never left the hospital. One week later, Cleveland came to him with news of another donated heart.

By September 2014, Brian was back in school in front of his class of fifth-graders. The surgery—12 hours start to finish—was already receding in his memory as he made plans to play more golf and get into peak physical condition.

He knows his heart came from a younger, larger man. In fact, the heart was so big that Cleveland could not immediately close his chest after the transplant. Brian plans to thank his donor by writing a letter to his family and delivering it to UCH for safekeeping, should the family ever want to contact him.

“I thought it would be nice for them to know where the heart is,” Brian said. “I want to thank them for such a selfless act.”

“It’s huge what they did,” Holly said. “One person donating organs can save so many lives.”

Despite everything that Holly and Brian Sherry have been through, the word they use most often is “lucky.” Sherry considers himself lucky to have been born at a time when technological advances could keep him alive while he waited for a  transplant. Cleveland can already envision the future of the technology, a time when the LVAD is miniaturized, powered by an internal battery and implanted surgically, reducing the need for donated hearts.

“An internal LVAD could challenge heart transplantation in the next five to 10 years,” Cleveland said.

The Sherrys also believe they were lucky to live near the Anschutz Medical Campus, so that a heart transplant was almost as close as the grocery store.

The Sherrys also consider themselves very lucky in one other way—both took a chance on a new relationship despite the risks. They are now thinking about  a honeymoon, or at least throwing a good-sized party to celebrate their marriage.

“We needed each other,” Holly said. “This has helped me heal from my past.”

“She convinced me that she would stick around, no matter what,” Sherry said, “and she did. She’s a good woman.” 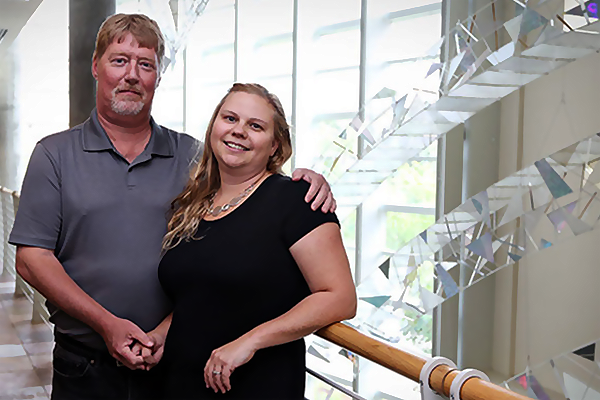 Tagged with:
University of Colorado Hospital