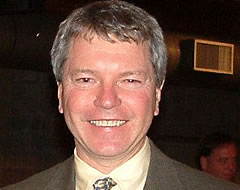 "The recession has had a dampening effect on us," Allen said during the regents' Sept. 16 meeting in Boulder.

Even so, fiscal year 2008-09 proved to be the TTO's best yet for new invention disclosures, especially in the field of renewable energy, Allen said.

Allen told the regents that CU is one of the top U.S. universities when it comes to startup companies. Over the past five years, technology based on CU research has led to the creation of 51 companies. Of those, 44 are operational, and 42 have operations in Colorado, he said.

Bioscience-related inventions continue to dominate the university's tech portfolio. TTO reports that three drugs based on CU research have been approved by the Federal Drug Administration to treat rheumatoid arthritis, macular degeneration and adult shingles. Also, 21 drugs remain in clinical trials and more than 100 therapeutic, diagnostic and medical device technologies are in the preclinical development pipeline.

Allen said CU's patent portfolio continues to grow. He said the TTO experienced a slight budget contraction for new patent filings, but the loss is more than offset by strong patent reimbursements from licenses. Because of exclusive options and licenses, and the creation of companies, "our performance in these areas places CU TTO at a nationally prominent level," Allen said in his annual report. He said the TTO also has built productive relationships via partnerships with Colorado-based incubators, business advisers, investors and entrepreneurs.

"As the recession continued, licensee product sales slowed, licensee development programs were curtailed, and financing ground to a near standstill," he said.

Allen said the TTO's 2008-09 revenue of $4.4 million was the lowest level in several years; the office drew down $916,000 from a treasury loan to offset the drop. The office does not expect its annual licensing revenue to cover its operating expenses for the next two to three years, and plans to draw from the remainder of the treasury loan and its long-term investment account.

Despite the hardships, Allen said TTO's internal and external customers and stakeholders could expect "a continued high level of service."