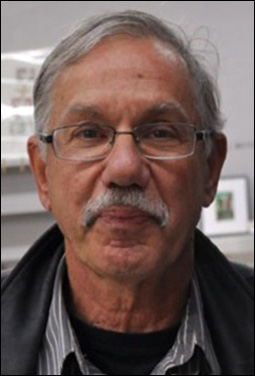 Louis Cicotello, professor emeritus in the department of fine arts at the University of Colorado Colorado Springs, died March 6, 2011, in a climbing accident near Hanksville, Utah. He was 70.

In 1996, he earned the Chancellor's Award in recognition of his campus leadership. He returned to campus to co-teach core humanities courses.
Rex Welson, associate dean of the College of Letters, Arts and Sciences, and a personal friend of Cicotello, shared this account of Cicotello's rappelling accident and the rescue of Cicotello's brother, David, from the Utah mountains. David Cicotello was with Louis in No Man's Canyon and then survived for six days until being rescued by Wayne County Search and Rescue on Saturday, March 12.

In a letter to the campus community, UCCS Chancellor Pam Shockley-Zalabak's wrote:

"He was a world traveler, excellent cook and a vigorous canyoneering enthusiast.

"According to his colleagues, Professor Cicotello was an energetic participant and stalwart champion of the arts on the campus and in the community. He was a frequent and respected contributor to exhibitions and galleries along the Front Range and beyond. His work in sculpture and collage was consistently recognizable. Many of his collages can be found on campus. One of his most prominent works is the commencement mace which is carried by the commencement marshal during the graduate processional at each graduation ceremony.

"Professor Cicotello modeled and lived the creative process. He valued curiosity, experience, personal connection, careful observation, and joy. He taught, encouraged and challenged his students who will carry his legacy.

"In addition to his wife, Millie Yawn, and brother, survivors include his daughter, Sarah; son-in-law, Chris; and a granddaughter, Olive."

Arrangements for a memorial service are pending.

Send your thoughts and suggestions for the Newsletter.
END_OF_DOCUMENT_TOKEN_TO_BE_REPLACED