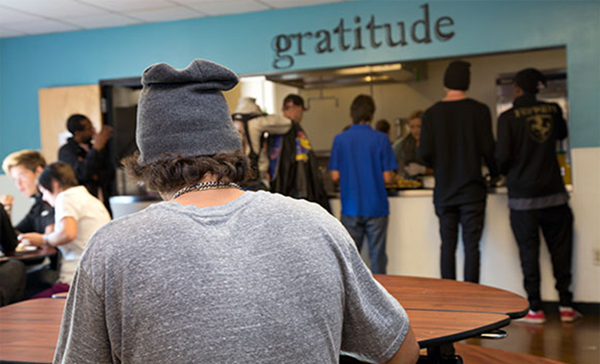 Scott Harpin, Ph.D., rarely hears back from the young people he works with at the Urban Peak shelter. And maybe that is a good thing.

“If they’re not going back to the shelter, we hope that their situation has improved, and maybe that means success,” said Harpin, assistant professor, College of Nursing at the University of Colorado Anschutz Medical Campus.

Harpin’s research focuses on the health outcomes of vulnerable adolescent and young adult populations. His association with Urban Peak, an organization dedicated to serving homeless youth in the Denver metro area and Colorado Springs, began in 2012 thanks to introductions by colleagues at the university, including Christine Gilroy, M.D., in the School of Medicine.

“The opportunity to work with the shelter was right up my alley,” Harpin said. For a decade, he had worked as an intake nurse at St. Joseph’s Home for Children—a stepping stone between home and foster care—in Minneapolis, Minn.

As he enters his fourth year at CU Anschutz, Harpin’s passion for his community-engaged research is clear.

“All my training has been in adolescent development and adolescent resiliency, trying to get kids on a pathway of health and wellness,” he said. “If they’ve had bad things happen to them, I want to figure out how we intervene on their cycle of trauma, abuse, and poverty, and offer a better trajectory in life.”

Harpin does not look for specific illnesses or issues when first meeting adolescents. “I look for whatever is ‘upstream,’” he explained. “I’m public health trained, so I’m always thinking about prevention and those multiple layers—like their environment, education, and family of origin—that impact where they are today.”

The children and young adults seen by Harpin are not usually sick, but they have often been traumatized in other ways.

“My program of research has been to look at their mental health and to provide brief interventions, so they can get control of whatever tough situation that they are in—hoping they don’t return to risky behaviors or a traumatic environment,” he said.

A Community Engagement grant through the Colorado Clinical and Translational Sciences Institute has enabled Harpin to partner with Urban Peak to improve the shelter’s screening process and train lay people to carry out those brief interventions. Their goal is to screen all 250 runaway youths who are admitted each year to the Urban Peak shelter for mental health distress and provide tailored interventions for their most pressing concerns. He believes it’s important to address mental health issues in this population because his research revealed what he describes as “incredible” rates of suicide and self-harm.

“It’s vital to get these kids safe and off the street,” he said. “But it’s also critical that we address the depression, the anxiety, or in the most extreme cases, keep them from hurting or killing themselves to give them a chance.”

In fall 2014, Harpin began to develop future public health leaders as a lead faculty member on a unique dual degree being offered by the university, among the first program of its kind in the nation. Students in the Doctor of Nursing Practice/Master of Public Health Nursing (DNP/MPH) Dual Degree Program will complete 62 credits, as opposed to the 84 credits that would be required if the two programs were studied separately.

Harpin explains that the students will benefit from an interprofessional classroom environment. Public health, nursing, medical and pharmacy students will sit in on classes with each other.

“We hope to develop public health nurse leaders and administrators,” he said. “The students are going to learn both public health care and individual-level care, and will be prepared to lead alongside health care providers with degrees in the field. They will be positioned to influence policy, health care education and impact care for multiple chronic illnesses. They’ll fulfill a greatly needed role for advanced-degree prepared nurses with an interdisciplinary education in public health.” Harpin hopes that some dual degree graduates will go on to work with many of the vulnerable populations found across Colorado.

When Harpin presents at conferences, his research receives validation from the leaders in his field and senior faculty from institutions across the country.

“They tell me to keep pushing ahead as this research is important,” he said. “It’s good to hear that from the same individuals I reference in my papers.”

Despite the challenging nature of working with at-risk adolescents, Harpin confesses to finding positive aspects in what can often be difficult situations.

“I like to work with the riskiest, toughest youth,” he said. “They often have crazy stories but are usually very open, and they want to learn from me. They yearn for someone to give them a chance, someone who cares about them, and to be a role model in a way.”

Even though he may never hear back from the young people he helps at Urban Peak, he believes they are thankful for his help.

“I once had a young woman at Urban Peak tell me she always wanted to be a nurse, and that after spending time with me and our nursing students, that desire was reignited. It was very gratifying to think how my career—first in foster care health, and now improving service delivery through research to runaway youth—may have changed lives like hers.”

Tagged with:
College of Nursing, research, School of Medicine