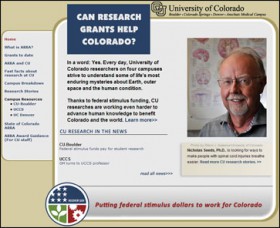 A new Web site launched by the University of Colorado system administration aims to keep the CU community and the public updated on how much federal stimulus funding faculty researchers are receiving this year through the American Recovery and Reinvestment Act, or ARRA.

The new site, which debuts today, underscores the value of the millions of dollars in one-time research funding CU faculty-researchers are receiving on all four campuses. As of Sept. 8, the CU system had received 139 ARRA research awards worth nearly $52 million, said Teresa Osborne, the system administration's director of capital assets, who compiles data for the CU system.

Leonard Dinegar, senior vice president and chief of staff in the president's office, called the system's new ARRA Web site an important tool for highlighting the university's high-quality faculty and the broad spectrum of investigative work they are conducting. The site spotlights a handful of research success stories, but that number will grow over the coming weeks and months through the university's reporting process.

"This site will serve multiple purposes. It will help us fulfill our obligation in reporting how our researchers will use the federal funding they receive, and it will help us publicize the world-class research that is taking place on our campuses," Dinegar said. "Our new Web site will also store important information for faculty and administrators who need a single portal that offers all the information they need about CU's ARRA funding."

Among other features, the site includes links to campus resources, the state of Colorado's official ARRA Web site, CU research in the news, and several stories that highlight CU researchers and their work.

While university officials say they are grateful for the increased federal funding for CU researchers, they are careful to temper their enthusiasm with a reminder that the university can only apply such funding to specific, sponsored research projects. For general funds that help pay for utilities, technology and faculty and staff salaries, CU still must rely on support from the state of Colorado, tuition revenue and other sources.