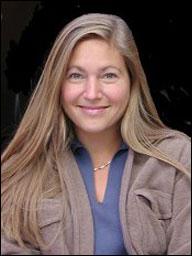 Raised in Spain, she earned graduate degrees in Spanish literature at Princeton. Later, she turned part-time dabbling in computer programming, Web design and social media into an integral part of how she teaches. Now, she's known for her ability to show the digital generation how to mesh their love of technology with their thirst for higher learning in the humanities.

Diane Sieber, an associate professor of humanities in the University of Colorado at Boulder College of Engineering and Applied Science, is the 2010 President's Teaching Scholar, a recognition that puts her into one of the most prestigious, scholarly cohorts at CU.

The program honors faculty members who excel in teaching, creative work, scholarship and research; 74 professors have received the recognition since 1989. Those selected for the distinction serve as teaching and research ambassadors on their respective campuses, and develop individual, departmental and campuswide projects to assess classroom learning.

"This is both an honor and a great new challenge," Sieber said. "I am looking forward to developing my scholarship of teaching and learning research project with the help of my new PTS colleagues, and to many years of ongoing collaboration and service work on campus."

Sieber is well-known in the CU-Boulder community for her interdisciplinary scholarship and her keen ability to establish a deep rapport with students through the use of technology. She joined the CU-Boulder faculty in 1993 in the department of Spanish and Portuguese. She later became co-director of the prestigious ATLAS Research Institute, and has collaborated with colleagues in education, the humanities, engineering and other fields. Since July 2007, Sieber has served as director of the Herbst Program of Humanities in Engineering.

Sieber has "forged her unique research program at the confluence of classical literature and cutting-edge technology," said Brian M. Argrow, associate dean for education in the College of Engineering and Applied Science, in a nomination letter. "A chronological survey of Diane's strong publication, presentation and lecture record, presented in her Curriculum Vitae, presents the evolution of a scholar with roots in the languages and literature who recognized the unique opportunity to integrate emerging information technologies with literature and culture." 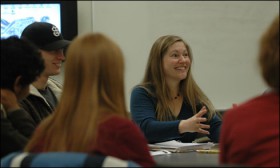 In fall 2008, Sieber gained international media attention from an informal, in-class experiment she conducted after noticing that some students were distracted because they were busy e-mailing, blogging and playing online video games during class, Argrow said.

Sieber recorded the names of students who were "digitally distracted" before administering an exam, and later announced that the average score of the "laptop subset" was a full 12 percent lower than the rest of the class. Some of her students changed their ways and saw their test scores improve, but those who resisted repeated their lower performance.

"Diane made it clear, however, that these results did not imply that digital devices should be outright banned from the classroom," Argrow said. "Instead, she recognized that these devices are ubiquitous and students learn most effectively in the world in which they live, not in the artificial world that is sometimes created in the classroom environment."