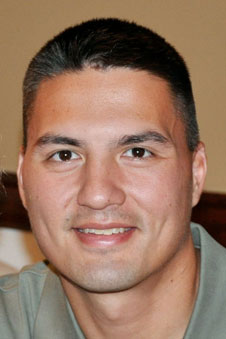 His training as a medical doctor will no doubt help him and his crew if he makes it to the International Space Station, but it's the thrill of riding a rocket into space that most excites Kjell N. Lindgren, who is on target to become the next University of Colorado alumni astronaut.

Lindgren is among nine members of the United States' newest class of astronaut candidates prepared to undergo rigorous training in hopes of one day flying to the International Space Station to conduct scientific research and explore Earth's atmosphere.

The group of six men and three women, ranging in age from 30 to 43, is NASA's first class of astronaut recruits in five years. All are expected to report to NASA's Johnson Space Center in Houston in August to begin two years of training. Their participation in the program comes as the nation marks the 40th anniversary of the first moon landing.

"I have long been inspired by the brilliance and courage demonstrated by the pioneers of early human spaceflight," Lindgren said in a NASA interview. "I am attracted to the thrill of exploration, the promise of discovery and I'm just plain excited about riding a rocket into space."

CU has played a key role in the United States' space program for more than half a century, receiving some $50 million in NASA research funding annually—more than any other public university. In fact, CU has led the way as the premier space institution in the world, launching instruments on NASA missions to every planet in the solar system. Recently the space agency awarded $6 million to CU-Boulder to build instruments to conduct experiments on the lunar surface and in the moon's atmosphere.

Lindgren, 36, of League City, Texas, joins a distinguished cadre of 18 CU alumni astronauts, including Scott Carpenter, who flew the second orbital flight in 1962, and Steve Swanson, an Atlantis and Discovery astronaut and space walker. Most of the university's alumni astronauts graduated from CU-Boulder, but at least two are UCCS graduates.

Lindgren graduated from the University of Colorado Denver School of Medicine in 2002, and will become the first alumnus to represent the Anschutz Medical Campus and the School of Medicine. He said he has wanted to be an astronaut "for as long as I can remember."

Born in Taipei, Taiwan, Lindgren's Colorado ties run deep. In addition to obtaining his medical degree from CU, he earned a bachelor's degree in biology with a minor in Mandarin Chinese from the U.S. Air Force Academy in Colorado Springs, and a master's degree in cardiovascular physiology from Colorado State University in Fort Collins. He also earned master's degrees in health informatics at the University of Minnesota and public health at the University of Texas Medical Branch in Galveston, Texas.

Before being selected as one of NASA's newest astronaut recruits, Lindgren was flight surgeon for NASA's space shuttle, International Space Station and Constellation programs at the University of Texas Medical Branch-Wyle. To prepare for his seemingly written-in-the-stars future, he followed a career path and opportunities he enjoyed, but which also applied to manned space flight.

He competed against more than 3,500 highly skilled, highly trained professionals from across the country before being picked for NASA space flight training.

"After the rigorous selection process and years of hard work pursuing this goal—it was joyous and humbling," he said. "I really enjoyed sharing the news with my family."

Bill Gerstenmaier, NASA's associate administrator for space operations, said the new crop of astronaut candidates is among the most talented and diverse the agency has ever selected.

"They will join our current astronauts and play very important roles for NASA in the future. In addition to flying in space, astronauts participate in every aspect of human space flight, sharing their expertise with engineers and managers across the country," Gerstenmaier said. "We look forward to working with them as we transcend from the shuttle to our future exploration of space, and continue the important engineering and scientific discoveries aboard the International Space Station."