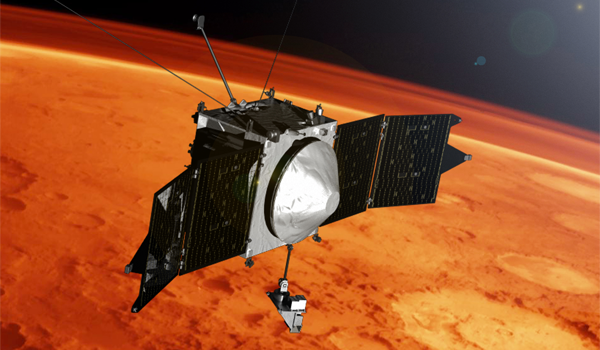 Early discoveries by NASA’s newest Mars orbiter are starting to reveal key features about the loss of the planet’s atmosphere to space over time.

The findings are among the first returns from NASA’s Mars Atmosphere and Volatile Evolution (MAVEN) mission, which achieved orbit Sept. 21 and entered its science phase on Nov. 16. The observations reveal a new process by which the solar wind – an intense stream of hot, high-energy particles blowing off the sun at more than 1 million mph – can penetrate deep into a planetary atmosphere.

MAVEN scientists have made the first comprehensive measurements of the composition of Mars’ upper atmosphere, as well as its electrically charged ionosphere. The results also offer an unprecedented view of ions, or charged particles, as they gain the energy they need to escape from the atmosphere.

“We are beginning to see the links in a chain that begins with solar-driven processes acting on gas in the upper atmosphere and leads to atmospheric loss,” said University of Colorado Boulder professor Bruce Jakosky, MAVEN’s principal investigator. “Over the course of the full mission, we’ll be able to fill in this picture and really understand the processes by which the atmosphere changed over time.”

On each orbit around Mars, MAVEN dips into the ionosphere – the layer of ions and electrons extending from about 75 miles to 300 miles above the surface, said Jakosky of CU-Boulder’s Laboratory for Atmospheric and Space Physics. The layer serves as a kind of shield around the planet, deflecting the solar wind.

Scientists have long thought that measurements of the solar wind could be made only before these particles hit the invisible boundary of the ionosphere. But MAVEN’s Solar Wind Ion Analyzer has discovered something surprising: a stream of solar-wind particles that are not deflected, but instead penetrate deep into Mars’ upper atmosphere and ionosphere.

Interactions in the upper atmosphere appear to transform this stream of ions into a neutral form that can penetrate to surprisingly low altitudes. Deep in the ionosphere, the stream emerges, almost Houdini-like, in ion form again, according to the MAVEN science team.

The reappearance of these ions, which retain characteristics of the pristine solar wind, provides a new way to track the properties of the solar wind and may make it easier to link drivers of atmospheric loss directly to activity in the upper atmosphere and ionosphere.

MAVEN’s Neutral Gas and Ion Mass Spectrometer is allowing scientists to explore the nature of the reservoir from which gases are escaping by conducting the first comprehensive analysis of the composition of the upper atmosphere and ionosphere. The studies will help researchers make connections between the lower atmosphere, which controls climate, and the upper atmosphere, where the loss is occurring.

The instrument has measured the abundances of many gases in ion and neutral forms, revealing well-defined structure in the upper atmosphere and ionosphere, in contrast to the lower atmosphere, where gases are well mixed. The variations in these abundances over time will provide new insights into the physics and chemistry of this region and already have provided evidence of significant upper-atmospheric “weather” that has not been measured in detail before.

New findings into how gases leave the atmosphere are being provided by the spacecraft’s Suprathermal and Thermal Ion Composition (STATIC) instrument. Within hours after being turned on at Mars, STATIC detected a “polar plume” of ions escaping from Mars. This measurement is important in determining the rate of atmospheric loss, according to MAVEN scientists.

“Each of these results is unexpected,” Jakosky said. “Together, they're helping us to understand how the upper atmosphere works today. This will let us determine how it worked in the past and how much gas from the atmosphere has been lost to space.”

As the satellite dips down into the atmosphere, STATIC identifies the cold ionosphere at closest approach and subsequently measures the heating of this charged gas to escape velocities as MAVEN rises in altitude. The energized ions ultimately break free of the planet’s gravity as they move along a plume that extends behind Mars.

The MAVEN spacecraft and its instruments have the full technical capability proposed in 2007 and are on track to carry out the primary science mission, said Jakosky. The MAVEN team delivered the spacecraft to Mars on schedule, launching on the very day in 2013 projected by the team five years earlier. MAVEN was also delivered well under the confirmed budget established by NASA in 2010.

“The MAVEN spacecraft and its instruments are fully operational and well on their way to carrying out the primary science mission,” said Jim Green, director of NASA’s Planetary Science Division at NASA Headquarters in Washington. “The management team’s outstanding work enabled the project to be delivered on schedule and under budget.”