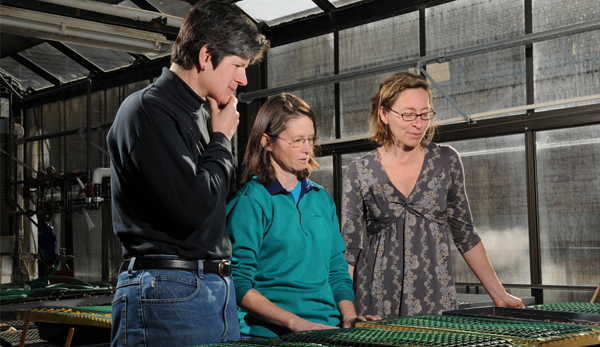 Computer science Professor Liz Bradley (left), meets with Rhonda Hoenigman (center) and their collaborator, Assistant Professor in Ecology and Evolutionary Biology Nichole Barger, to discuss an algorithm that lets the plants decide where they will grow best.

Liz Bradley is a great professor because she loved being a student. The computer science professor graduated from MIT with three degrees – a bachelor’s master’s and doctorate -- in electrical engineering and computer science. And, while earning these degrees would be more than enough to earn bragging rights, Bradley earned her two graduate degrees while training as an Olympic rower. She took fifth place in the 1988 Olympic Games.

“I was lucky that I had a graduate adviser who understood that I had 11 Olympic workouts a week,” she says of her graduate experience. “But, being at MIT was a fire hose of fabulous things to think about.”

Bradley acts as an adviser on the Biofrontiers Institute’s IQ Biology Interdisciplinary Quantitative Biology graduate program because cross-discipline work is something she is passionate about. Computer science now plays a huge role in managing the massive data sets in the biosciences.

“Computers, by default, are cross-disciplinary. They are used everywhere in scientific discovery. We solve equations with computers because we can’t solve them with pencil and paper,” she says. “And it is because I am open to working across disciplines that I tend to be the home in the department for the student projects nobody else will supervise.”

Rhonda Hoenigman is pursuing a doctorate and, with Bradley’s encouragement and advice, she has created a computer algorithm that aids in the design of efficient landscapes: those that offer the best growth, with the most shade, using the least amount of water. This “agent-based” algorithm allows the plants to move themselves in a virtual world, and find the places they would grow the best. Hoenigman has a vision for the algorithm to help building planners save water while cooling structures with shade—a necessity for water-starved areas like the American Southwest. 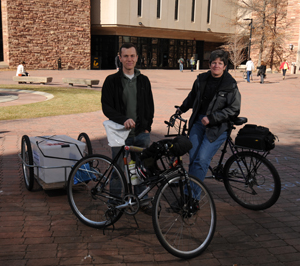 Caleb Phillips created Boulder Food Rescue as part of his work with Bradley. He delivers food to organizations in Boulder County using his bike, a trailer, and a computer algorithm.

Caleb Phillips, another student who works with Bradley, also created a new algorithm that addresses sustainability: one that can show us how to redistribute food waste.  Phillips’ algorithm takes into account how much food is being thrown away across a given region, like Boulder County, and also calculates the cost of rescuing it and redistributing it to organizations in need across that region.

Most food rescue organizations use a warehouse model, which usually prevents them from handling fresh produce and other perishables. In addition, transportation costs are higher when trucks are needed to deliver food from a central warehouse.

“About 70 or 80 pounds a day is a normal delivery, but we rescued 950 pounds the day after Thanksgiving,” says Phillips, who has to notch his belt a little tighter because of all the bike deliveries he now makes. On days where food donations are too heavy, or the snow is too deep, Phillips’ organization has access to trucks via Boulder’s CarShare program. “There is definitely enough food in Boulder County to feed everyone,” he says.

“It’s not about us faculty, it’s about them, the students,” Bradley says. “That’s what grad school is about.” And it must be that old Olympic discipline she has that allows her to mentor incredible students, while still producing amazing work of her own.

Bradley studies chaos theory and computer performance dynamics. In her work, dropping the last decimal place off of a number that has six places after the decimal may seem insignificant—not even enough to worry about in a huge data set. But those insignificant numbers can have huge impacts across a large collection of data or across a long period of time. This theory is also known as the “Butterfly Effect,” referring to the flapping of an insect’s wing that could cause enough atmospheric change, over time, to create a devastating hurricane. Bradley is using this theory to work toward learning to predict and manage how computers and data interact.

You don’t have to look too hard to see that there is another “Butterfly Effect” going on in Bradley’s world. If chaos theory is predicting how a small change can equal a large effect, you only need to look as far as Bradley’s students to see how her interactions are exactly that: the butterfly’s wing creating a hurricane of change.

Send your thoughts and suggestions for the Newsletter.
END_OF_DOCUMENT_TOKEN_TO_BE_REPLACED