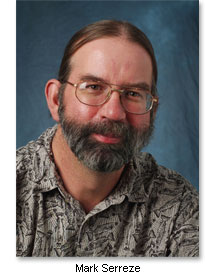 The University of Colorado at Boulder's globally renowned National Snow and Ice Data Center has a new director.

CIRES, the Cooperative Institute for Research in Environmental Sciences, appointed Professor Mark Serreze as the NSIDC's new director, and the CU Board of Regents approved the decision on Tuesday, May 19, 2009. CIRES is home to five CU-Boulder research centers. Its governing body, the Council of Fellows, chose Serreze to succeed CU-Boulder geography Distinguished Professor Roger Barry, who retired in 2008 after 31 years of service.

Serreze will oversee a CU-Boulder center known for collecting and analyzing data, research and information focusing on Earth's frozen regions. He plans to build on the center's current collaborations within CU-Boulder, as well as with NASA, the National Oceanic and Atmospheric Administration, the National Science Foundation and other federal agencies.

"NSIDC will continue to be an indispensable national asset, providing the global research community, the public and decision-makers with the data and information needed to understand and prepare for the consequences of the changing frozen regions of Earth," he said.

A senior research scientist at the NSIDC since 2005, Serreze is a geography professor and a fellow of the Cooperative Institute for Research in Environmental Sciences.

He well known internationally for leading research efforts regarding the continuing decline of sea ice cover in the Arctic Ocean over the past several decades.

Serreze co-wrote an award-winning textbook, "The Arctic Climate System" with his predecessor, and is the author of more than 90 other scientific publications. In 2005, he testified before the U.S. Congress on changes in Arctic sea ice cover.